The sickle shape of Leo the Lion is easy to find in springtime skies, and it's a promising hunting ground for galaxies, with over 60 listed in The Millennium Atlas.

The challenging compact galaxy cluster, Hickson 44, also named the Leo Quartet, or Galaxy Cluster NGC 3190, after its brightest member, is located less than halfway between the stars Adhafera [Zeta Leonis] and Algieba [Gamma Leonis] along the sickle of Leo. (RA: 10h18m00.4s Dec:+21°48'44").

Paul Hickson defined a compact galaxy cluster as a "small, relatively isolated collection of four or five individual systems that are set in close proximity to one another, and that differ in brightness by no more than 3 magnitudes." Our challenge object is around 100 light years distant and consists of the four galaxies; NGC 3190, NGC 3193, NGC 3187, and NGC 3185. Two edge-on spiral galaxies are at its center; the dust lane-spliced NGC 3190, and S-shaped NGC 3187. NGC 3193 is an elliptical galaxy, and the face-on spiral galaxy NGC 3185 floats the farthest from the other three. 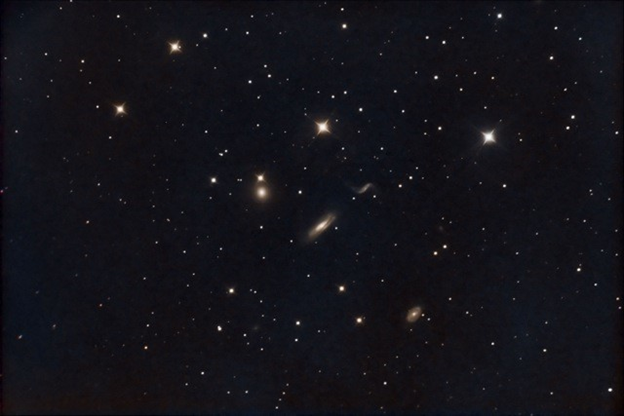 While this group of galaxies is evolving and interacting together across vast distances, you can collect them in one eyepiece view. But, they are by no means easy, says Tammy Plotner, who recommends a minimum of 150mm telescope to see them under dark, clear skies.

The following observations were made using a 10-inch f/4.5 reflector, from a fairly dark site in the South Mountains of western North Carolina. The accompanying sketch was made at a magnification of 114x, with a 0.50ş field of view.

At magnitude 11.0, NGC 3190 is the most prominent and most easily recognized member. This galaxy is bright, highly elongated, and oriented NW-SE. It also has a brighter elongated core.

NGC 3193 at magnitude 10.9, appears fairly small, round and highly concentrated in the middle. With higher magnification, a stellar nucleus can be seen.

NGC 3187 is the faintest of the group at mag. 13.1, and can be very difficult. It is located about 5 arc minutes NW of NGC 3190. This small and very faint galaxy is highly diffuse without concentration. On nights of less than excellent transparency, this galaxy is not visible with the 10-inch. A challenge for sure, and averted vision is mostly always required for me, and seldom can I hold this faint galaxy constantly.

NGC 3185 is faint at magnitude 12.2, and lies about 15 arc minutes SW of NGC 3190. The shape is mostly round, appearing as a very diffuse subtle glow, but fairly easy to see. 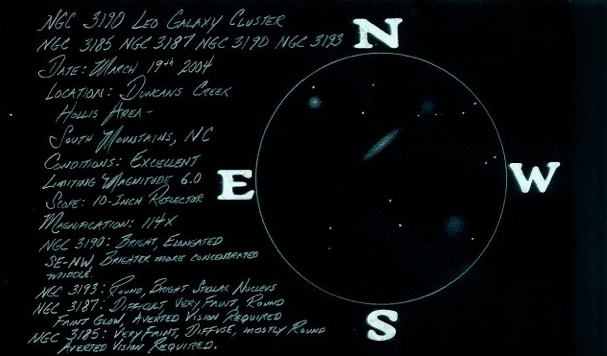 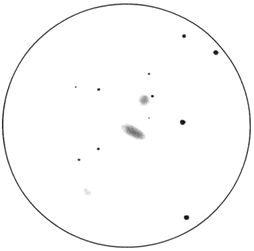 Hickson galaxy clusters are generally considered to be objects for larger apertures but several of the galaxy clusters can be seen even with small telescopes. A good example is Hickson 44 - the second brightest of all the Hicksons - in which all of the member galaxies are brighter than 13.5 magnitude. This makes the two brightest members (NGC 3190 & NGC 3193) fairly easy targets for small apertures and the two fainter ones (NGC 3185 and especially NGC 3187) a great challenge for any telescope.

With a cheap 3 inch (80 mm) refractor I was able to see three of the four members from under a fairly dark location at the Teide caldera in Canary Islands (Spain) from an altitude of 7480 feet (2280 meters). The brightest member in the group - NGC 3190 appears as a fairly bright, elliptical 3' x 1' disk with a brighter nucleus. NGC 3193 an even brightness, round glow close to a 9th magnitude star. NGC 3185 appears only as a very faint, very small and slightly elliptical streak of light without details. With an 8 inch Orion DSE, all four of the members are visible at 96x under mediocre skies, although NGC 3187 remains very elusive. 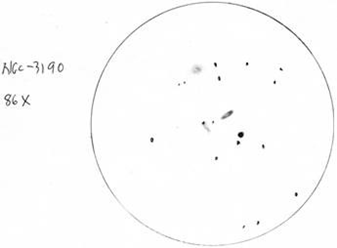 From the desert SW, using a 16-inch f/6.4 at 70X, the four galaxies were easily seen as variously shaped smudges. NGC 3190 is a fairly bright oval smudge right in the middle of the group, mostly featureless. Just a bit NE, and next to a relatively bright star is NGC 3193, a slightly brighter ball of light. It reminded me of an unresolved globular. WSW lies NGC 3185, appearing as a soft, mostly round glow. The most difficult of the group is NGC 3187 at mag. 13.0 and is by far the most difficult of the group. It lies just a few minutes, NNW of NGC 3190. By far the hardest one to see is NGC 3187. All four galaxies fit nicely in a 1/2ş field of view.

Interested in contributing your observations to the next Deep Sky Challenge? Email mariag@telescope.com.