What We Know About the Sun's Magnetic Flip

You may have heard recently that the Sun's magnetic field has undergone a reversal. It's true. While this though may sound a little terrifying, the fact is that our Sun does this about every eleven years or so. It's part of what is known as the solar cycle. During the flip, there is often solar activity like flares, which can affect space electronics, but we have safeguards in place for most flares. And while weather can be affected, the effects are usually subtle.

The first evidence of this solar cycle was seen in the early 1600s, when observations of sunspots showed there were periods of more and less sunspots. By the mid 1800s it became clear that sunspot frequency generally oscillated over a period of about 11 years. 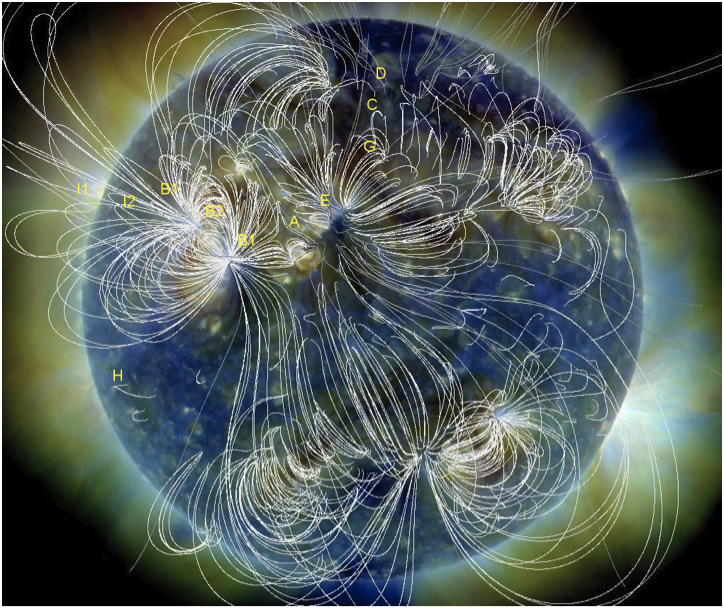 Map of magnetic field lines on the Sun. Credit: NASA

We're not entirely sure what causes this reversal. But we do know the Sun's magnetic field is due to a magnetic dynamo in its interior. The flow of charged plasma induces the magnetic field, similar to the way a flow of current in a wire produces a magnetic field. Changes in the behavior of that dynamo is what leads to the solar cycle. But the mechanism behind those changes is unclear.

Part of the difficulty in understanding these reversals is that while they usually occur roughly every 11 years, they do not occur like clockwork. There are cycles that are a bit shorter and a bit longer. Also, the Sun can enter extended periods of lesser activity. For example, from about 1790 to 1830 there was a period when the oscillations were smaller, and the periods of maximum sunspot activity were less intense, known as the Dalton minimum. We're not entirely sure why such minimums occur either.

Interestingly, our current solar cycle (known as cycle 24) has been noted to have some similarity to the early stages of Dalton minimum. Before the Dalton minimum, cycles got successively smaller, with the same drop to about half the activity that had been typical. If we follow a similar pattern, then cycle 25 will be about the same as cycle 24, and we will have several decades period of a relatively quiet Sun. What does this mean for humans and the Earth? Low solar activity correlates with slightly cooler temperatures, but that's about all people might notice. Our atmosphere is a pretty good barrier to anything dangerous.

But now that the Sun's magnetic reversal has occurred for this cycle, we know we're about halfway through the solar maximum. You can expect word of the next magnetic reversal to hit the news in about 11 years.

Did you know that the magnetic poles of the Earth also flip? The last time it flipped was 700,000 years ago, according to evidence found in geological strata. What will happen when it flips again? That is not entirely clear, but scientists have many speculations. Stay tuned for my next article on geomagnetic reversal.