Most asteroids are well behaved and spend their time in the asteroid belt, located between the orbits of Mars and Jupiter. But some venture into our neighborhood: these are known as near Earth asteroids. 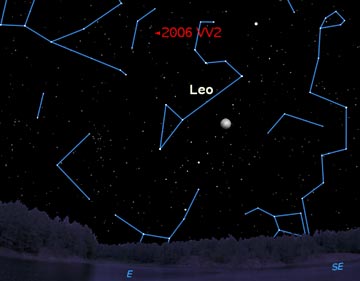 2006 VV2 was discovered by LINEAR on 2006 November 11. It will pass within 0.023 astronomical units of the Earth (8.8 times the distance to the Moon) on the night of March 30/31, uncomfortably close for an asteroid roughly 1.5 km in diameter. It should be at least 10th magnitude in brightness, and so readily observable by typical amateur telescopes. 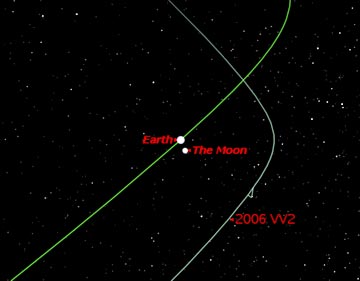 2006 VV2's orbit is quite steeply inclined to that of the Earth, so that the asteroid will appear to be traveling from north to south in our sky. As it approaches Earth, its orbit is slightly farther away from the Sun than the Earth's, and the asteroid is traveling slightly behind the Earth around the Sun.

Currently it is a 15th magnitude object in Cepheus, where it will remain for the next month. On March 26 it moves into Camelopardalis and two days later enters Ursa Major. It will take another two days to cross Ursa Major, and then enters Leo Minor at 1:12 p.m. EDT on March 30.

As soon as the sky gets dark, it should be easy to pick up with a telescope, if it follows its predicted path—more about that below. Just after midnight, at 12:43 a.m. EDT, it enters Leo and is at its closest to the Earth. It will be traveling across the sky at a speed slightly more than one degree per hour. This is not quite as fast as some near Earth asteroids travel, because 2006 VV2 is moving along with Earth on a parallel track. This gives us a better chance of seeing it.

The problem with catching near Earth asteroids is that their orbits are usually poorly known because when first discovered they are coming pretty well straight at us along our line of sight. Then, once an orbit is calculated, it often gets perturbed by the strong gravitational forces of the Earth and Moon. I've observed several close asteroid passes, and in most cases the asteroid arrives somewhat ahead of its predicted position, so it's very easy to miss it completely. The trick is to anticipate its path.

Even so, don't trust the positions. Use Starry Night's Celestial Path command (only available in Pro and Pro Plus) to plot the asteroid's path through the stars. Choose a spot on the path ten or fifteen minutes further along than where you expect the asteroid to be, and then watch that area for the asteroid. In other words, expect the asteroid to be further along its path than predicted. It's like laying an ambush. Use a wide field eyepiece, one degree field of view or more, in case the asteroid is displaced from its path sideways. Find a suitable group of stars on the path, memorize their relative positions, and then wait for an interloper to appear. Once you locate the asteroid, try to track it. It will be moving noticeably relative to the stars behind it (though more slowly than some asteroids I've observed in the past).

This is a near perfect opportunity to see a near Earth asteroid: a bright object moving pretty fast, and it's even on a Friday evening/Saturday morning. The only down side is that there will be an almost full Moon only 20 degrees away from the asteroid in the sky.

If you succeed in catching 2006 VV2, be sure to let us know on the Starry Night® Yahoo Group:

Even if you miss it, report in to let us know you tried. Good hunting!