When June begins, Venus and Saturn will be nearly 25° apart, Venus close to Pollux in Gemini and Saturn close to Regulus in Leo. Oven the month of June, we will witness the spectacle as the brilliant Venus swiftly crosses the entire constellation of Cancer until the two meet, close to Regulus, at the beginning of July. 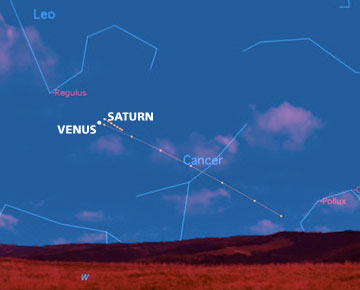 In the Starry Night image above, we see the paths of the two planets from June 1 to July 1, each dot marking five days along the planets? paths. Because Saturn is 19 times farther away from us than Venus, 9.94 versus 0.53 astronomical units from Earth, it moves much more slowly against the background stars. Thus Venus appears to catch up with Saturn and pass it on July 1. A particular date to watch is June 18, when the four-day-old crescent Moon will be located right in between Saturn and Venus.

Soon after its close approach to Venus, Saturn will disappear into the Sun's glare, while Venus continues to grow brighter until in reaches maximum brilliancy on July 12. Then it too disappears into the Sun?s glare but it will pass between us and he Sun, while Saturn is passing behind the Sun. This so called inferior conjunction of Venus will take place on August 18, Venus passing 8 degrees south of the Sun.

Saturn's conjunction with the Sun comes three days later, on August 21. As the image below from Starry Night shows, the Sun, Venus, and Saturn will be joined by Mercury and Regulus for a quintuple conjunction! Normally this would be invisible to us unless there happened to be a solar eclipse on that date, but the LASCO C3 images on the SOHO Web site should enable us all to witness this wonderful grouping: 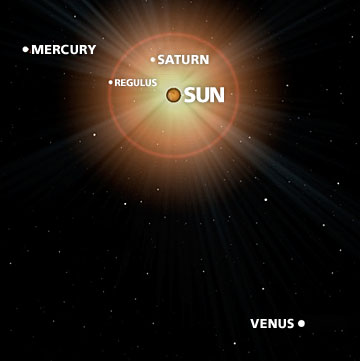 I once observed Venus within a-day-and-a-half of inferior conjunction, and saw something similar to the diamond ring effect in a solar eclipse: the entire ring of the atmosphere of Venus was backlit by the Sun. Trying to observe Venus this close to the Sun is very dangerous, especially this year as Venus will be below the Sun in the sky. When I observed it, it was north of the Sun, so the Sun could be safely blocked by a convenient rooftop.

From about the beginning of July onward, the crescent phase of Venus will be visible in ordinary binoculars. This makes a challenging observing project and I encourage you to try to follow Venus with binoculars over the next two months. There also will be some wonderful opportunities for photography of the encounter with ordinary cameras.