Throughout most of human history, there were only five planets: Mercury, Venus, Mars, Jupiter, and Saturn. The Earth itself wasn't really considered a planet until the Copernican theory was established in the Sixteenth Century. No one thought there might be other planets farther from the Sun than Saturn until Sir William Herschel accidentally discovered a new planet on March 13, 1781. He initially named it "Georgium Sidus" after his patron, King George III of England, but eventually Bode's suggestion of the name "Uranus" replaced this.

The reason why Uranus wasn't discovered earlier was that, at its brightest, it is only magnitude 5.7, just on the borderline of visibility with the naked eye. This month gives us an opportunity to attempt the challenge of seeing this faint planet with the naked eye, as it reaches opposition on September 9, 2007. Even if you can't manage to see it with your naked eye, it will be an easy target with binoculars or a small telescope.

Here's how to print a finder chart with Starry Night to help you locate Uranus. Along the way you'll learn some tricks to using Starry Night:

1. Change the date either to September 9, 2007, the night of opposition, or to the night you plan to observe. You can change the date by clicking on each field and using the up and down cursor keys, or simply type in the number you wish to enter, using the numbers 1 to 12 for the months. Turn off Starry Night's clock by clicking on the central button under "Time Flow Rate."

2. Find Uranus by opening the Find pane using the Find tab at the left side of the screen. Click in the check box alongside "Uranus" to get its label to display. Click on the menu button to the left of the word "Uranus" and choose "Centre." If you get a message saying Uranus is not currently visible, click on the "Best Time" button. Otherwise, click on the Info tab and then click the "Transit:" button. Either way, this will place Uranus as high in the sky as possible. Your screen should now look something like this: 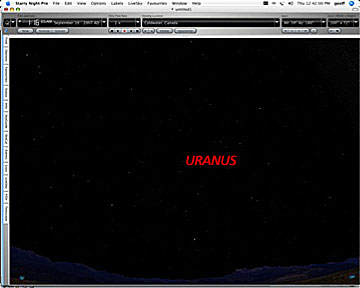 Well, we can see where Uranus is, but how do we find it? Let's add some guideposts:

3. Turn on the constellation stick figures by going to the View menu and choosing Constellations:Astronomical.

4. Turn on the constellation labels by going to the Labels menu and choosing Constellations.

5. It would be nice to have some of the brighter stars labeled, so again go to the Labels menu, but this time choose Stars. Your screen should now look something like this: 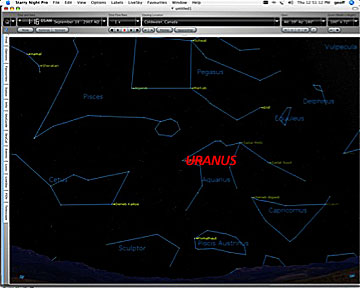 Now we want to print out a chart which we can take outside to observe with. For this we?ll use Starry Night's 3 pane chart feature, which automatically prints three charts on the same page:

6. Under the File menu, choose Print. You will see a print dialog box similar to this one. Carefully change all the settings to match what you see below: 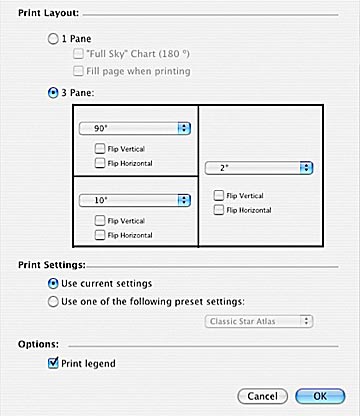 We first select "3 Pane." This allows us to print three different views on a single page.

I've chosen "Use current settings" so that the labels and stick figures will display properly. I always turn on "Print legend" so that the date and time will be on the chart. Click "OK" and then "Print."

The resulting chart should look like this uranus.pdf. With this chart in hand, along with your red flashlight and binoculars, it becomes quite easy to find Uranus.

The 90° chart shows you that it's between the lower right corner of Pegasus (the star Markab) and Fomalhaut, the only first magnitude star in this part of the sky. Looking at that half-way point, you'll see the stars Phi and Lambda Aquarius, and Uranus is very close to Phi.

The 2° chart will let you zero in on Uranus with a telescope. Don't expect to see much besides a tiny blue-green disk, as Uranus is very far from the Sun and very tiny. Seeing even the brightest of its retinue of moons takes a rather large telescope. For those of you who want to try, Starry Night plots the positions of these moons accurately, telling you exactly where to look.

This exact same technique can be used to plot finder charts for any object in the sky. You may want to add extra features such as the field of view of your binoculars, finder scope, or telescope eyepiece.

This is just one of the many ways in which Starry Night becomes a useful tool in the pursuit of the night sky's secrets.