When I was reading Dava Sobel's book Galileo's Daughter, I came across a facsimile of the page in Galileo Galilei's notebook in which he had recorded his observations of Jupiter's moons from night to night. It was great fun to set Starry Night to the dates in the notebook, and see exactly what an accurate observer Galileo had been.

But sometimes there are surprises, situations where Starry Night seems decidedly wrong. Recently we received the following question at the Starry Night support desk:

I am reading the recently published book Mayflower by Nathaniel Philbrick, an account of the Pilgrims' landing at Plymouth Rock (winner of The National Book Award).

On page 238 of the book, the author mentions "On the night of June 26 (1675), a total eclipse of the moon was witnessed all across New England."

I set Starry Night to Providence, Rhode Island on this date and it shows a waxing crescent moon setting in the western sky at 8:30 PM I have checked several days before and after the 26th and a year before and after, but still didn't see an eclipse.

Whenever a user reports a bug, we have to check it out to see if we can replicate it and, if so, report it to the development team. So I set up my copy of Starry Night to exactly the same situation, and found that he was right ? no eclipse on June 26. 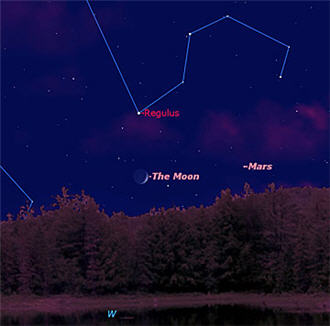 How could Starry Night be so wrong? I decided to check the next time of Full Moon, which is of course the only time when a total lunar eclipse can occur. I moved forward to the night of Full Moon, July 6, 1675, and there was my eclipse. 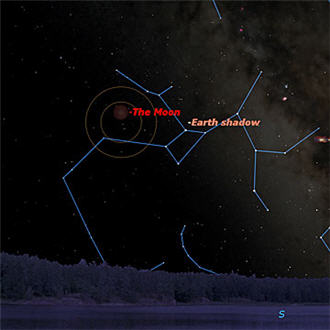 So the actual eclipse occurred 10 days later. Very strange! But there was something familiar about that number, and then I remembered this article in the Starry Night knowledge base:

Does Starry Night use the Gregorian or Julian calendar for old dates?

Pope Gregory was knowledgeable in scientific matters. He realized that the Julian calendar had gotten out of synchronization with the actual astronomical seasons, and appointed a commission to study the problem and make recommendations.

Their recommendation was to just drop ten whole days from the calendar, so then October 4, 1582 would be immediately followed by October 15, 1582. But this adjustment was made almost a century before this eclipse.

However, I also remembered that Pope Gregory?s radical change to the calendar was not universally accepted at first, especially in officially Protestant countries like England.

In fact, it still hasn't been accepted by parts of the Orthodox Catholic Church even today. Some further research showed that it wasn?t adopted in England (and hence in its American colonies) until 1752, over 75 years after this eclipse.

In England, September 2, 1752 was immediately followed by September 14, 1752, 11 days being skipped because the Julian calendar had become even more inaccurate by then.

So the mystery was solved, and Starry Night?s accuracy was vindicated! The eclipse took place on July 6 according to the Gregorian calendar, but the colonists in New England were still operating on the Julian calendar and thought the date was June 26.

If you want to read more about the Julian and Gregorian calendars, there's a good article here:

You can check this out yourself in Starry Night by setting the date and time to October 4, 1582, 11:59 PM, and advancing the time by one minute. Watch what happens to the date!

About The Author
Geoff has been a life-long telescope addict, and is active in many areas of visual observation; he is a moderator of the Yahoo "Talking Telescopes" group.