Whether you are a beginner or a seasoned "pro," summer offers a wealth of sky sights. Here are just a handful of easy targets. Stayed tuned here on OrionTelescopes.com for more suggestions as the summer sails by.

The early evening offers three easy planets. Venus continues to dominate the western sky, with Saturn nearby in Leo. On June 18, the Crescent Moon, Saturn and Venus make a wonderful sight in the western twilight, a great target for binoculars such as Orion's Resolux WP 7x50s. 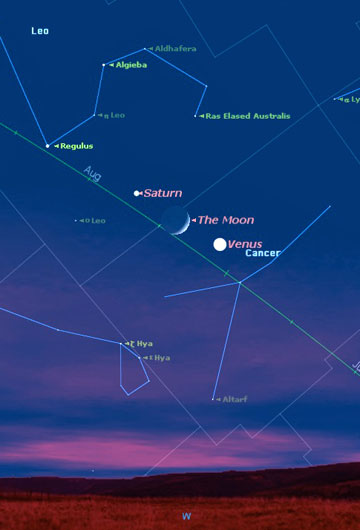 If you miss it, there is a similar grouping on July 16. To the southeast, Jupiter is a standout near Antares in Scorpius, but you'll need a scope to see the nightly parade of moons. (The Orion ED refractor line is a good choice for Jupiter, Saturn?s rings, the Moon and planets in general.) Jupiter just gets better through the Summer, but Venus and Saturn will be gone by August, lost in the glare of the setting Sun.

Strictly speaking, it isn't a constellation, but don?t miss the "Big Dipper," high overhead but dipping to the northwest as the hours (and the Summer) go on. To help locate two bright stars, follow the curve of the Big Dipper's handle downward to Arcturus and then on to Spica. You'll be "arcing to Arcturus and speeding on to Spica."

Midway between the bright stars Arcturus and Vega is the faint constellation named for the mythological strongman, Hercules. The constellation is faint, but contains one of the sky's gems, a magnificent globular cluster called M13. You can pick it out as a fuzzy "star" in binoculars, but you'll want a real light bucket, such as an Orion SkyQuest Dobsonian, to catch this cluster's glittering diamonds. 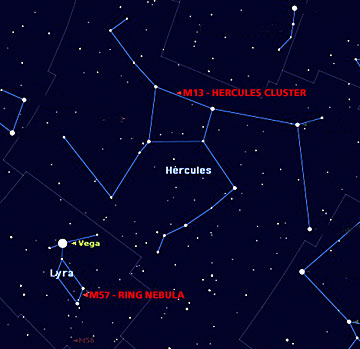 Figure 2: M13 in Hercules and M57 The Ring Nebula in Lyra

A slightly harder Summer target is the "Ring" nebula, M57 in Lyra, not far from the bright star Vega. Smaller scopes may show M57 as a faint, fuzzy and elliptical-shaped "ghost," but you'll need a six-inch or greater objective (for example, an Orion AstroView EQ reflector) to get a good view of the ring structure. But once seen, it is never forgotten.

You should also check out Lyra's famed "double-double" star, Epsilon, which is best viewed in a refractor. In mid to late Summer, you'll want to identify the "Summer Triangle" made up of the stars Vega, Altair and Deneb.

Close to Deneb is a large, loose open cluster called M39. Use binoculars or better, a low-power Dobsonian. And while you are at it, try finding the "North American" nebula, just about three degrees from Deneb. This is visible to the unaided eye under exceptional conditions, but usually you'll need at least a good pair of binoculars.

Also from a very dark location, you can see the heaven's twinkling river, the Milky Way, crossing straight through the Summer Triangle. Galileo was the first to realize that the Milky Way is made of stars, an observation you can recreate with a good pair of binoculars. Meanwhile, Jupiter is blazing in the South, near Scorpius, a region with too many star clusters and nebulosities to mention. Scan the area with binoculars, following up with views through a Dobbie or low power reflector scope.

By late summer, the Milky Way is complemented by our nearest major galactic neighbor, the magnificent Andromeda Galaxy, M31. Under good, dark conditions, you should be able to spot this with the unaided eye, a faint oblong smudge looking like a small part of the Milky Way that has broken off. But in reality it is a major galaxy, larger than the Milky Way, with hundreds of billions of stars and more than two million light years away. M31 is one of the farthest objects visible to the unaided human eye. When you view the Andromeda Galaxy, whether with just your eye or binoculars or perhaps a nice Dobsonian, you are peering more than two million years in the past. Now that is an amazing thought to ponder on a warm Summer evening!