Pete Lawrence looks at how your images can help monitor the position of potentially hazardous objects crossing Earth's orbit. 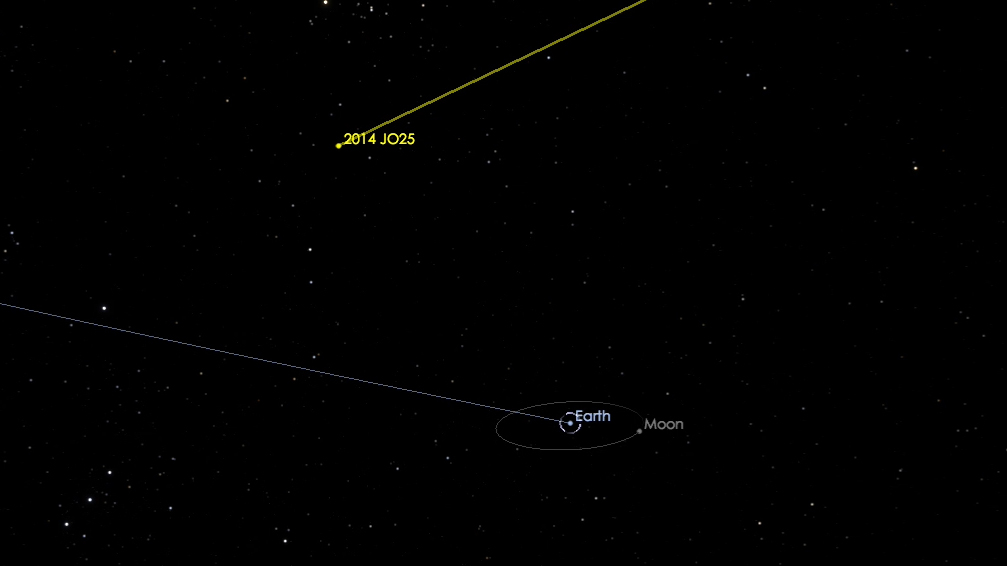 This computer-generated image depicts the flyby of asteroid 2014 JO25. The asteroid safely flew past the Earth on April 19, 2017 at a distance of about 1.1 million miles (1.8 million kilometers), or about 4.6 times the distance between Earth and the moon. Image credit: NASA/JPL-Caltech

Asteroids or minor planets are small Solar System bodies that are visible because they reflect sunlight. The larger members of this group have dimensions measured in hundreds of kilometers, but asteroids can be as small as 1m along their largest axis. Most asteroids are located in what's known as the main belt, a huge repository for such objects located between the orbits of Mars and Jupiter. In all but very rare circumstances, asteroids appear star-like through amateur scopes. Visually, they can be measured in terms of their brightness, position and occasional apparent interactions with other objects.

The sheer number of asteroids in orbit around the Sun means that occasionally we get to see one occult a distant star. Asteroid occultations provide an important way to determine the shape profile of these rocky bodies.

Accurate date and time recording is vital when observing asteroids, as it is this information which ultimately is used to refine the objects orbit and position.

Asteroids look just like stars when viewed through a telescope. It's only when their positions have been noted or photographed over an extended period — normally days — that their motion and true nature is revealed. Most asteroids appear to move slowly against the background stars but those that venture close to Earth may have enough apparent speed to appear to move in real time when viewed through a telescope or binoculars.

Scientific asteroid images for astrometry and photometry need to record the body as a sharp dot without trailing. For slow-moving asteroids this may not be an issue, but fast movers require short exposures or setups that track the asteroid itself. This is especially useful for the high-cadence photometry necessary to determine the light curve, and hence spin-rate, of an asteroid.

For more general appeal, in outreach material for example, a fast-moving asteroid provides a convenient way to produce a trail that would otherwise take many extended exposures to capture. In this instance, a correctly polar aligned telescope tracking at the sidereal rate or, better still, autoguided on the stars, will produce a sharp star field with the asteroid as a light trail. A similar effect can be created by aligning shorter exposures on the stars, and stacking them with the brighter elements set to show through.

Many asteroids are within range of a basic telescope and DSLR setup. For scientifically calibrated work, CCD cameras, (preferably with specialist filters) are recommended. By using planetary imaging techniques, larger telescopes may even be able to capture larger asteroids as extended discs during favorable oppositions, rather than the usual star-like dot.

Measuring the position of an asteroid is an important step in determining and refining its orbit. This is especially true for asteroids on eccentric orbits, which have the capacity to pass close to Earth. Smaller bodies returning to the inner Solar System may have been gravitationally perturbed, leading to changes in the previously established orbit, and these need to be monitored.

The astrometry of asteroids is similar to comet astrometry, with the exception that asteroids are somewhat easier to measure, appearing as singular dots of light without the complexity that accompanies the expansive head of a comet.

It is recommended that serious astrometric measurements follow the guidelines set out by the International Astronomical Union's Minor Planet Center (MPC), available online at www.minorplanetcenter.net/iau/info/Astrometry.html.

The basic workflow for the astrometric measurement of an asteroid is quite straightforward. First you need to obtain a set of images that include the object you intend to measure. Then you'll need some software assistance to measure the position accurately; the shareware Astrometrica is highly recommended.

Astrometrica allows you to 'blink' your images, which should reveal the asteroid moving against the static star field. The software will need to identify the star field in the images in order to determine the asteroid's position. You can help here by manually identifying the star field and supplying Astrometrica with the correct RA and dec. coordinates for the center of the imaging frame. Once entered, the program attempts to match the star field.

If it doesn't quite get things right, you can adjust the alignment manually. Astrometrica's star template can be adjusted for scale with a focal length used setting, for rotation with a position angle setting and positionally with an onscreen arrow key pad. Once the alignment has been set, clicking on the object will generate an MPC compatible log file of positional data which can then be submitted according to the submission guidelines.

Occasionally an asteroid will pass in front of a star, dimming the star's light as it goes. There are numerous programs available to predict such events as well as websites, such as Euraster, which presents results without you having to having to calculate them yourself.

A typical asteroid occultation path will be a narrow track and may require you to travel to a specific location in order to view and record the event. This adds additional complexity in that it requires the use of a portable observing and recording setup and a means to accurately calculate your location and altitude. The modern way to do this is with some form of GPS recorder.

One of the hardest parts of observing asteroid occultations is to locate the star that is going to be occulted. This can be done using a Go-To system, but you often need to use very accurate star charts to augment the process, especially when the star to be occulted is very faint.

A common way to record asteroid occultations is with a low light video camera. The resulting video, normally recorded in the AVI format, can then be analyzed by specialist programs such as LiMovie or Tangra, which are both available for free.

A successful occultation should produce a light graph for the star that shows it dim as the asteroid passes in front of it and brighten as the asteroid moves out of the way. Accurate timing of the star's dimming will produce a line profile across the asteroid. Interesting though this is, such profiles really become useful when multiple observers record and communicate these events. With multiple profiles recorded, it's then possible to produce a more complete profile of the asteroid.

Obviously for this to be of any worth, a highly accurate time signal needs to be used. A device such as the International Occultation Timing Association's video time inserter (IOTA-VTI; https://occultations.org) is an ideal way to do this as it has the capability to insert coordinated Universal Time (UTC) on every frame of a recorded video signal.

ABOUT THE WRITER
Pete Lawrence is an expert astronomer and astrophotographer who holds a particular interest in digital imaging.