October will see the launch of a European mission to the innermost world in our Solar System. 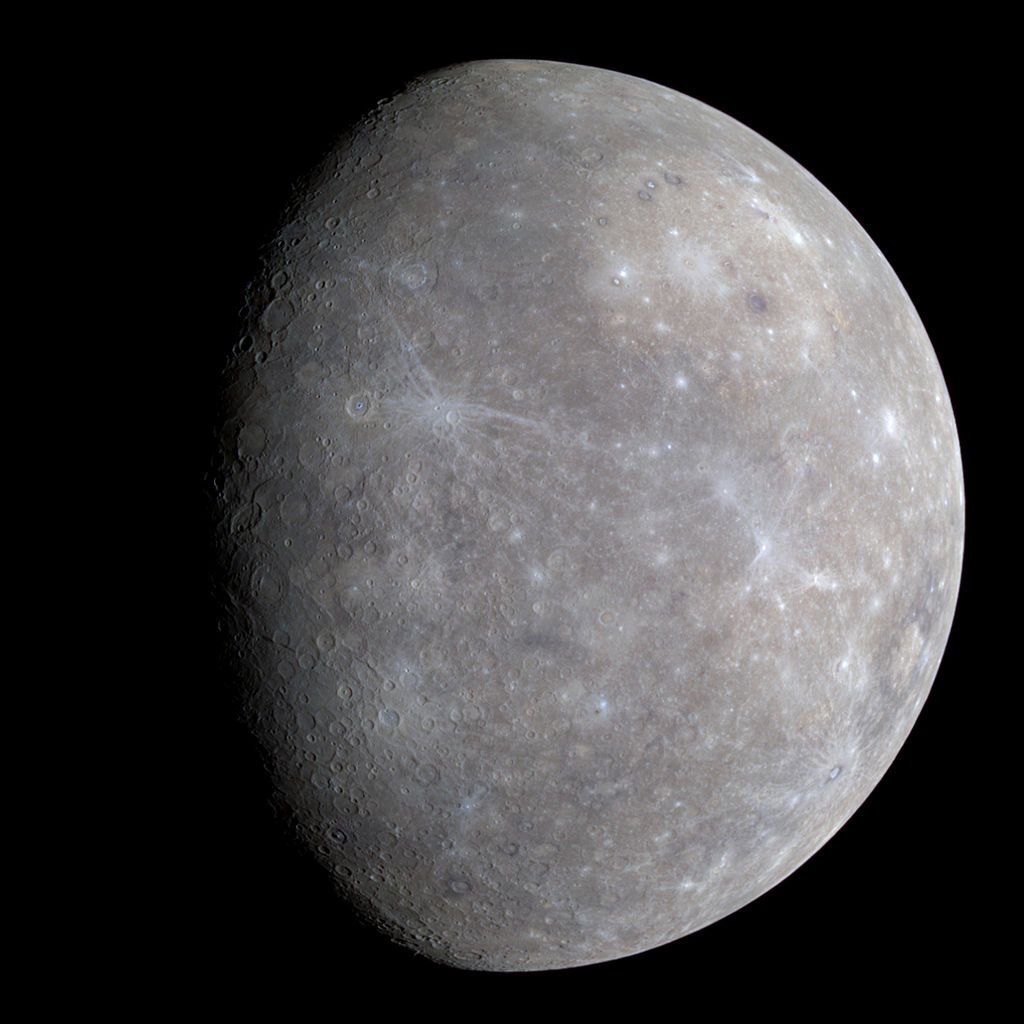 "A peculiar planet of mysteries and surprises" — this is how European planetary scientist Johannes Benkhoff describes Mercury. In October this year, ESA will launch the BepiColombo spacecraft to the Solar System's smallest and innermost planet. Some eight years from now, it will begin studying Mercury in meticulous detail across the electromagnetic spectrum. According to Benkhoff, the mission's project scientist, planetary researchers expect BepiColombo to solve many Mercurial mysteries. It's a planet, he says, that is also a key element in understanding the formation of the Solar System.

The mission's Ariane 5 rocket launch from French Guiana will send two orbiters to the planet: the relatively small Japanese Mercury Magnetospheric Orbiter (MMO) and ESA's 4,100kg Mercury Planetary Orbiter (MPO). Both are mounted on a six-meter tall transfer module that will deliver the two craft into orbit around the 4,879km-diameter planet.

"It's a very harsh environment," says Benkhoff, referring to Mercury's distance from the Sun, which varies between just 46 and 69 million km. "But if we're lucky, the nominal mission duration of one year may be extended up to four years."

Although Mercury is much closer to Earth than, say, Saturn, it's tough to get there, basically because the planet's orbital speed is much higher than Earth's. The first Mercury probe, NASA's Mariner 10, didn't even make it into orbit. Launched in 1973, it performed three close flybys in 1974 and 1975, before ending up orbiting the Sun. Mariner 10 mapped just shy of half of the planet's surface, revealing a crater pocked landscape. It also discovered a weak magnetic field: quite a surprise, since no one expects Mercury to have retained a molten core.

It would be 30 years before another probe set course for Mercury. NASA's MESSENGER spacecraft launched in August 2004, and orbited the barren world between March 2011 and its intentional crash in April 2015. From its polar orbit, MESSENGER collected nearly 290,000 images and mapped the planet's topography. Among other things, it discovered deposits of ice at the floors of permanently shadowed polar craters, mysterious 'hollows' beneath the surface, signs of relatively recent volcanic activity, and a mysterious displacement of the magnetic field by 400km northwards with respect to the planet's center.

So what's left for BepiColombo to discover? A lot, says former project manager Jan van Casteren at the European Space Research and Technology Center (ESTEC) in Noordwijk, the Netherlands. Originally, he says, BepiColombo was scheduled to arrive first, but the project was delayed by technological problems, cost overruns and redesigns. "Still, in 2009, ESA's Science Programme Committee decided to give the go-ahead for the mission because of its great scientific potential. BepiColombo is a much more versatile mission than MESSENGER, which was relatively simple."

During its seven-year cruise phase, BepiColombo's solar orbit will gradually be tweaked by one Earth flyby, two Venus flybys and no less than six Mercury flybys. This 'gravity assist' technique, pioneered by Mariner 10, was invented by Italian astronomer Giuseppi 'Bepi' Colombo, after whom the mission is named. The craft's versatile ion engine will perform additional orbital corrections. Eventually, in early December 2025, BepiColombo will arrive in its elliptical polar orbit. A few months later, the lowest point of the orbit is brought down to just 250km, and science operations will begin.

At Mercury, a spacecraft receives about 10 times more solar energy than it would in Earth orbit: some 14,500 watts per square meter. Moreover, Mercury's surface is so hot (430°C) that BepiColombo's main orbiter needs to be protected from the planet's infrared radiation, which delivers more energy: 5,500 watts per square meter. To cope with these extremes, the craft is completely wrapped in thick, multilayer thermal blankets. A huge contraption of silver-coated titanium fins always points away from the planet to radiate excess heat away into space.

You might expect that the use of solar panels is straightforward when you're so close to the Sun, but you'd be wrong, as Markus Schelkle of Airbus Defence and Space in Germany (the spacecraft's prime contractor) explains. "The solar array had to be newly developed using novel materials," he says. "It's very difficult to make them resistant to both high temperatures and strong ultraviolet radiation." The same is true for the large solar arrays on BepiColombo's transfer module, which provide the energy for the ion engine. "Developing the solar arrays took as long as developing the whole spacecraft," says Schelkle.

As the MPO studies the planet up close, the smaller MMO will monitor the solar wind, the planet's magnetic field and the extremely tenuous sodium-rich 'exosphere'. Because of strong solar wind buffeting, Mercury's magnetosphere can sometimes be pushed back all the way to the surface. As a result, the solar wind directly interacts with the surface, possibly releasing sodium atoms in the process. "It's one of the questions we want to answer," says Hajime Hayakawa of the Japanese space agency JAXA. Another big issue he hopes MMO will solve is the mysterious 'shift' of Mercury's magnetic dipole. Meanwhile, as project scientist Benkhoff recounts, the MPO will map the elemental and chemical composition of the planet's surface, look for morphological changes in the mysterious subsurface 'hollows' (which may be due to the loss of volatiles), hopefully elucidate the origin of the polar ice deposits and study the planet's relatively large iron-nickel core. "Also," says Benkhoff, "Mercury's potassium/thorium ratio is much higher than current planetary formation models predict. The mission may shed new light on the origin of the Solar System." Van Casteren is confident that the ambitious €1.65 billion mission will be worth every penny. "The highest resolution images will reveal details as small as 5m," he says, "and BepiColombo has an impressive suite of 11 science experiments. It would have been nice to be the first, but in the long run, it's the science that counts."

Why is studying Mercury so tricky, and what might we learn from doing so?

Mercury is the smallest and innermost planet in the Solar System. Studying it from Earth (or with an Earth-orbiting instrument like the Hubble Space Telescope) is difficult, because it always appears close to the Sun in the sky.

Because Mercury is orbiting the Sun so fast (48kms on average), a spacecraft launched from Earth has to undergo a large change in velocity to end up orbiting the planet. That's one reason why there have been so few Mercury probes so far.

Visible light, X-rays and ultraviolet radiation from the Sun are about 10 times more powerful at Mercury than they are on Earth. The solar wind (charged particles from the Sun) is also more energetic. This is another reason why Mercury has remained relatively unexplored.

Compared to the other terrestrial planets, Mercury has a very large iron-nickel core. No one knows why. Maybe a huge primordial impact blew away most of its rocky mantle. Or maybe scientists need to adapt their pet theories on the formation of the Solar System.

Learning more about Mercury and its extreme environment will also help in understanding habitable-zone exoplanets that orbit at comparable distances to their parent dwarf stars.