Our world would be a much more chaotic place if Jupiter's orbit was only slightly different. 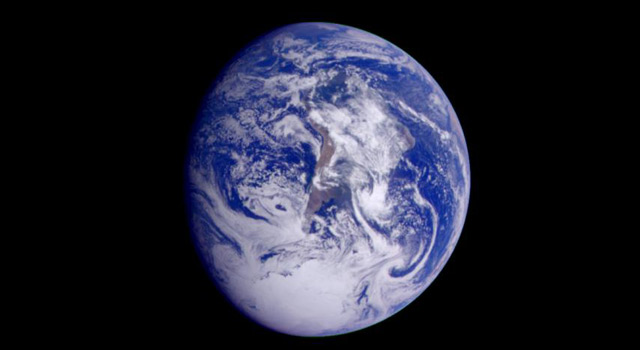 This color image of the Earth was obtained by Galileo on Dec. 11, 1990. Image credit: NASA/JPL

One of the central questions in planetary science, and the possibility of life elsewhere in the cosmos, is how ordinary our own planet is. Is Earth in some way in a special situation, offering unusually clement conditions for the emergence of life, or are there potentially multitudes of planets in our Galaxy that could be alive? This question is becoming more and more important in light of the fact that we continue to discover extoplanets. What features would these far-flung worlds need to offer the best hope for harboring extraterrestral life, and therefore which candidates should we shortlist for our follow-up telescopic observations of their atmospheres to look for signs of biology?

In particular, it's been argued that Earth may have offered an especially stable climate over the billions of years of its existence. Earth's climate has varied over planetary history — from the hot and humid times of the early Triassic period 250 million years ago, to the 'Snowball Earth' episodes when much of the world is thought to have frozen over. But overall, the terrestrial climate has remained remarkably stable. Some of the main drivers for a fluctuating climate, seen over the past few million years of the world swinging between ice ages and warmer interglacial respites, are the Milankovitch cycles. These are cosmic cycles in the eccentricity of Earth's orbit (how circular or egg-shaped it is), the planet's obliquity (how much its axis tilts), and the timing of the seasons — all affected by the gravitational influences of the other planets in the Solar System. The orbital eccentricity of Mercury, for example, varies far more than that of Earth. So the key question is, if the architecture of the Solar System was slightly different, how would this affect our world's orbit?

Jonathan Horner, at the University of Southern Queensland, and his colleagues have explored just this. They used a computer model of the Solar System to track how Earth's orbital oscillations changed as they tweaked the orbits of Jupiter, Venus or Mars in the Solar System, trying almost 40,000 different situations for each planet.

The most obvious result of their simulations, although not entirely unexpected, is that if Jupiter was slightly closer to the Sun it would completely disrupt Earth's stable orbit. Similarly, moving Venus further out than about 0.92 AU spells disaster. Interestingly, though, they did find that Venus and Earth could be stable even with both orbiting at 1 AU if they were located in a 1:1 orbital resonance — just like the Trojan asteroids in a locked orbit with Jupiter. This is one possibility for habitable worlds in exoplanetary systems with warm Jupiters.

The most important results, however, are the ones looking at more subtle shifts to Earth's Milankovitch cycles and how these might affect the planet's climate. The team intend to apply their modelling approach to Earth-like exoplanets, as and when they are discovered. Any worlds likely to experience more pronounced climate variability could have a lower chance of maintaining life, and Horner says that these can be ruled out and our attentions instead focused on the more promising worlds.

ABOUT THE WRITER
Lewis Dartnell is an astrobiology researcher at the University of Westminster and the author of The Knowledge: How to Rebuild our World from Scratch (www.theknowledge.org)