Home
Articles
Astrophotography
Exploring the Wonders of the Cave Nebula

More to The Picture: The Cave Nebula

If glancing at this image takes your attention immediately, it should. Not only is it ethereally beautiful and aesthetically pleasing, it's shrouded in bizarre cosmological coincidences. We see a dazzling array of multi-colored stars, but within this single area of space is a hidden ancient planetary nebula, a reflection nebula, a dark dust cloud, a Bok globule, a peculiar low-mass protostar, the edges of a massive X-ray bubble and the fringes of a supernova remnant. Hold on to the light of the Cepheus Flare and let's step inside Wolf's Cave... 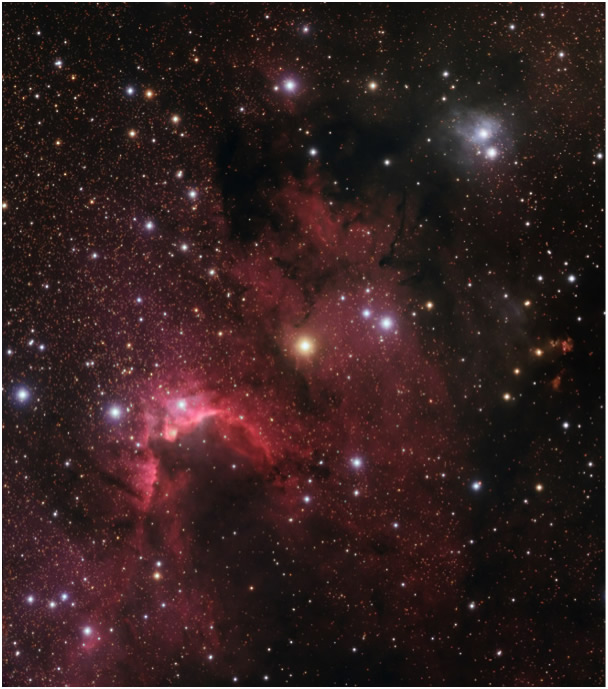 In the northern fringe of Cepheus lay an enigmatic gathering of cosmic dust clouds that first gained the attention of astronomers in 1908 when Max Wolf and August Kopff first noticed its complex structure. Using a 28-inch reflector, Wolf took a 2.5 hour exposure of the dusty area which he described as a "long, dark lacuna" and positively identified the reflection nebula cataloged as Sh2-155. His assistant, Kopff, using the same photographic plate, was the first to note the Bok globule which later became cataloged by E.E. Barnard as B175.

Those were wonderful years for astronomy; years when poetic descriptions were still acceptable to the general consensus, and Wolf dubbed the area the "Cave Nebula." But this isn't a spelunker's dream, because the radiation emitted from the nearby bright, young OB star would obliterate any explorer into this thick knot of interstellar dust. But there was one traveler, who dared: a main sequence star whose course took it through the dust maul at nearly 12 km per second. Running headlong into the obscuring mass at nearly supersonic speeds, the star slammed into Bok globule B175, sending shockwaves rippling through the structure and producing collisional excitation and ultraviolet pumping. The result of this cosmic crash was, of course, noted by Wolf in 1908 on his photographic records, but it was while searching high above the Milky Way's galactic plane in 1934 that this dusty molecular cloud was spied by Edwin Hubble and became known as the Cepheus Flare.

Together, reflection nebula Cederblad 201 and Bok globule B175 are referred to as van den Berg 152, and sometimes called Lynds Bright Nebula 524. Yet, it is Cederblad 201 itself that so interests modern science. Why? According to studies done by Goicoechea (et al) with the Spitzer Space Telescope, "We present the detection and characterization of a peculiar low-mass protostar (IRAS 22129+7000) located 0.4 pc from the Cederblad 201. The cold circumstellar envelope surrounding the object has been mapped through its 1.2 mm dust continuum emission with IRAM 30 m/MAMBO. The deeply embedded protostar is clearly detected with Spitzer. Given the large near- and mid-IR excess in its spectral energy distribution, but large submillimeter-to-bolometric luminosity ratio (it) must be a transition Class 0/I source and/or a multiple stellar system. Targeted observations of several molecular lines from CO, 13CO, C18O, HCO+, and DCO+ have been obtained. The presence of a collimated molecular outflow mapped with the CSO telescope in the CO line suggests that the protostar/disk system is still accreting material from its natal envelope. Indeed, optically thick line profiles from high-density tracers such as HCO+ show a redshifted absorption asymmetry reminiscent of inward motions. We construct a preliminary physical model of the circumstellar envelope (including radial density and temperature gradients, velocity field, and turbulence) that reproduces the observed line profiles and estimates the ionization fraction. The presence of both mechanical and (nonionizing) far-ultraviolet (FUV) radiative input makes the region an interesting case to study triggered star formation."

Star formation? Not surprising, deep inside the cave of a molecular cloud, but, if you'll pardon the pun, the plot thickens. The entire complex is about 1400 light years away from us at the perimeter of yet another massive molecular cloud, and at the same time it is situated on the frontier of a massive X-ray bubble located between the constellations of Cepheus and Cassiopeia. And that's not all. Thanks to hydrogen-alpha imaging, the whisper thin strands of an ancient supernova remnant near Cederblad 201 have also been detected.

Like a radioactive Roomba, the interstellar dust is being swept up as the expanding debris field moves toward where the Cepheus Flare lights the entrance to Wolf's Cave. These shocked molecular gas filaments were discovered in 2001 by John Bally and Bo Reipurth and belong to SNR 110.3+11.3, an unfathomably huge supernova remnant positioned only 1300 light years way; one of the closest known. Add to that the output of ancient planetary nebula Dengel-Hartl 5 and the celestial stew thickens even more. It is estimated all the elements will combine in about a thousand years and the product could very well ignite an incredible burst of star formation.

But, a thousand years is merely a blink of an eye in the grand scheme of things, isn't it? According to the 2007 studies done of the Wolf's Cave region by Edwin Bergin and Mario Tafalla; "Cold dark clouds are nearby members of the densest and coldest phase in the Galactic interstellar medium, and represent the most accessible sites where stars like our Sun are currently being born. Newly discovered IR dark clouds are likely precursors to stellar clusters. At large scales, dark clouds present filamentary mass distributions with motions dominated by supersonic turbulence. At small, subparsec scales, a population of subsonic starless cores provides a unique glimpse of the conditions prior to stellar birth. Recent studies of starless cores reveal a combination of simple physical properties together with a complex chemical structure dominated by the freeze-out of molecules onto cold dust grains. Elucidating this combined structure is both an observational and theoretical challenge whose solution will bring us closer to understanding how molecular gas condenses to form stars."

Carbonates from the planetary nebula, dust, exciting energy, photoelectric heating, polycyclic aromatic hydrocarbons, molecular gas... Where will it all end? What we do know is massive, bright star clusters are created from the giant molecular clouds. Will the Cepheus Torch one day ignite a brilliant stellar display from the mouth of Wolf's Cave? I wonder...