There is something wonderful about seeing distant objects. The light is sometimes hundreds of millions of years old or more. The mere fact that you can see something so distant, even if just to glimpse it, is amazing. And finding these objects is like a treasure hunt from childhood. It is challenging, relaxing, fulfilling, and most of all... fun!

This being new moon weekend, I've selected a few deep-sky targets - a relatively easy one in which to look for extra detail, and then a few true challenges. Whatever you do, try getting yourself away from city lights, even for an hour or two (or more), to a dark place - they are closer than you think. Then, give these targets a try. 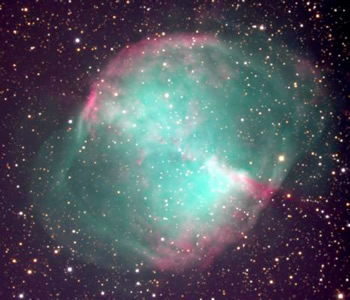 Messier 27 - First, a very familiar object, M27, or the Dumbbell Nebula. It is a large, bright planetary nebula some 1,360 light years away, and in an easy to locate position in the sky. To star-hop to the neighborhood, use Gamma Cygni (the center star in Cygnus), beautiful Alberio, and Epsilon Cygni - the bright star marking the eastern wing. Then imagine where a fourth star would be to make a parallelogram. That "fourth star" puts you in the right area. You'll see M27 as a hazy glow, in even a small finder-scope. Use an Orion UltraBlock filter to bring out extra details. Identify the central star, and see how much "apple core" shape you can discern. You don't need a big telescope for this one - it's just bright enough to see with a pair of 10x50 pair of binoculars.

Let's jump into the deep end now. The Dumbbell is in our galaxy, but now we'll travel to other galaxies, to a galaxy cluster 500 million light years distant! You will need dark skies, larger telescopes, and higher power magnification. 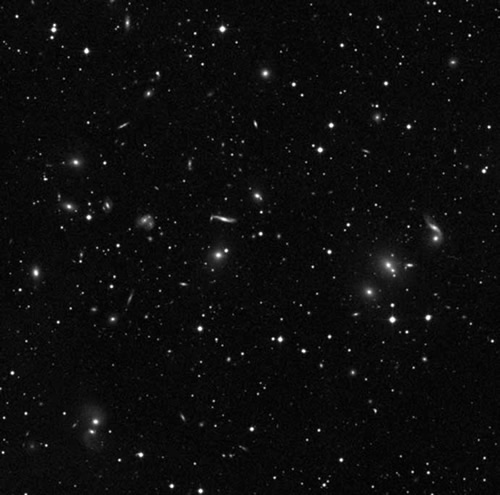 Let's visit Arp 122 and Arp 71, two interesting groups of galaxies in the massive Great Hercules Galaxy Cluster (AGC 2151), in the southern reach of Hercules. Star-hop from Beta to Gamma Herculis, then a bit more than that distance again toward the heart of Serpens Caput, to locate the right field. AGC2151 is dominated by several "bright" galaxies - of course "bright" is in comparison to the other members of this cluster. And some of these brightest members also have designations as "Arp" galaxies - which are unusual or interacting.

Overall, with a larger amateur telescope, you might indentify up to a few dozen galaxies in a single wide field eyepiece. In under a one degree field, there are 87 galaxies. But we'll focus on a few Arps:

Arp 122 is comprised of two galaxies - NGC 6040A and 6040B. In the above image, Arp 122 is seen toward the right edge, near the center line. A is a warped spiral with a very close elliptical B component. In the eyepiece, the A component will reveal a tiny stellar core and oval shape. The B component appears near the core of 6041A, but at best comes in and out of view as a tiny speck, at magnitude 16.6.

Arp 71 is NGC 6045, and also part of the Great Hercules Galaxy Cluster, located just under 8 arc-minutes east of NGC 6041. The image above shows it, warped and elongated, just to the left of center. This galaxy can be held in view with averted vision, and reveals itself as a small faint edge-on streak. In moments of great steadiness and transparency, a small companion galaxy, LEDA 84720, will pop into view at the east end of 6045.

Poke around this cluster, and see how many galaxies you can count. It's tricky, takes a bit of practice and patience, but once the skill is acquired, you'll love galaxy-hopping in the Abell Clusters!

Up for the challenge? Let us know if you're able to see any of these objects in the comment section below!

Mark Wagner is a life-long astronomy enthusiast and deep sky observer. He has spent the past twenty years popularizing amateur astronomy in the San Francisco bay area through his writing and community building. A past president of the San Jose Astronomical Association, he founded what is now the annual Golden State Star Party in California. Leave your comments or questions for Mark Wagner in the comments section below, and submit your sketches or images of the targets mentioned to the Orion Image Gallery.