Discovered by William Herschel on the day after Christmas in 1783, Hubble's Variable Nebula, is a fan-shaped nebula illuminated by the star R Monocerotis, in the constellation Monoceros. It was the first object to be photographed by the famous 200-inch Hale telescope on Palomar Mountain back in 1949. But that is not what makes this deep sky object so interesting.

Unlike many of the seemingly-unchanging nebulae of the deep sky, this reflection nebula appears to change in brightness and structure over weeks and months. Stephen James O'Meara described this fluctuating nebula as "a puff of breath, an ignited match next to a raging forest fire. Or so it seems, in deep, wide-field photographs." Both the illuminating star at its apex, and the nebulosity are considered variable, and many amateur astronomers have used images to illustrate shadows sweeping across it - Edwin Hubble being the first to note the changes in 1916.

Walter Scott Houston noted that at times he could detect it in a three inch telescope, while at other times, at ten inch telescope was needed. 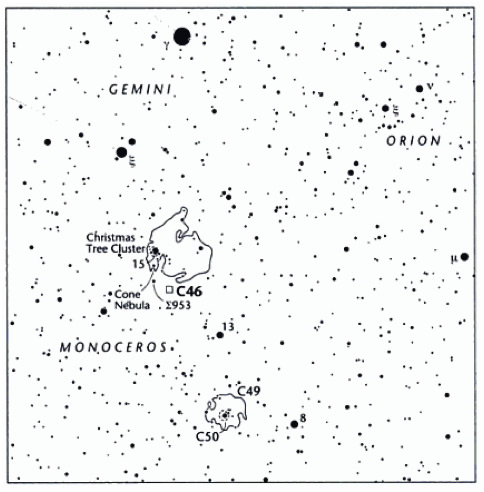 This month, make sure to locate Hubble's Variable Nebula, and share your observations with Orion's community - either as a "Review" on this article, or in the comments of this article on our Facebook Page. Here are two recent observations of NGC 2261:

My observation was made using a 10-inch f/4.5 reflector telescope from my moderately light-polluted backyard, located in the foothills of western North Carolina. The nebula is fairly small with high surface brightness, which allows the use of high magnification if seeing is good enough. The illuminating star, R Monocerotis is positioned at the apex of the extreme southern tip of the nebula. The shape of the nebula is triangular with a wide fan shaped tail pointed toward the NNW. I saw the nebula easily at low power, but high magnification was necessary to see the faint and interesting details. When I increased the magnification to 267x, structure was noted. The brighter section just north of R Mon. has the greater concentration following the western edge and also along the NE edge. The broad fan tail fades very suddenly and the NE side makes an obvious curve toward the NW. See other articles and sketches by Roger Ivester HERE. Here is a pencil sketch of NGC 2261 by Roger Ivester, colors inverted on a scanner: 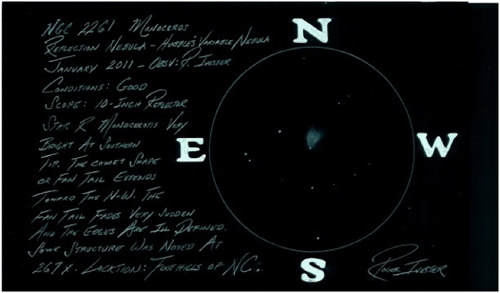 In a 5" triplet, f/7.5 on an Orion Atlas Pro Mount: This was a nice challenge, since I have never attempted to see this object in a telescope as small as the 5" refractor. To locate the object I did not use GoTo function of the mount, I star hopped from 8 to 13 Monoceros, past where Hubble's variable nebula is to the Cone Nebula and went back towards 13 Mon to the area where the 2261 is located. At first, scanning the area with a 1.25" 25mm Plossl I did not see the object. Replacing the eyepiece with a 1.25" 14mm, 82 degree FOV eyepiece I could see the nebula with direct vision. Through the 5", it is directly visible, but nothing as noticeable as a brighter galaxy, or say M57; the brightness would be comparable to other, fainter NGC objects - say a 10 or 11th mag galaxy.

With the 14mm, 68x, the nebula is distinctly fan shaped - like a "V" or half-closed fan with the brightness fading irregularly the further from the tip of the fan where the blades meet. This object has a distinctive shape, very unlike a galaxy (which are more lenticular) when viewed through a telescope.

The object reminded me of a comet or an out-of-focus star in a poorly collimated telescope - except that all the other stars in the field were in focus and round pinpoints.

Switching to a 1.25" 6mm Orion Planetary eyepiece, 159x, 2261 was seen as having a bright node at the vertex of the v-shaped nebula (the dense part of the cloud that hides the variable star R Monocerotis (R Mon). Since the object was easily seen with direct vision, I did not use nebular filters to attempt to enhance the view. 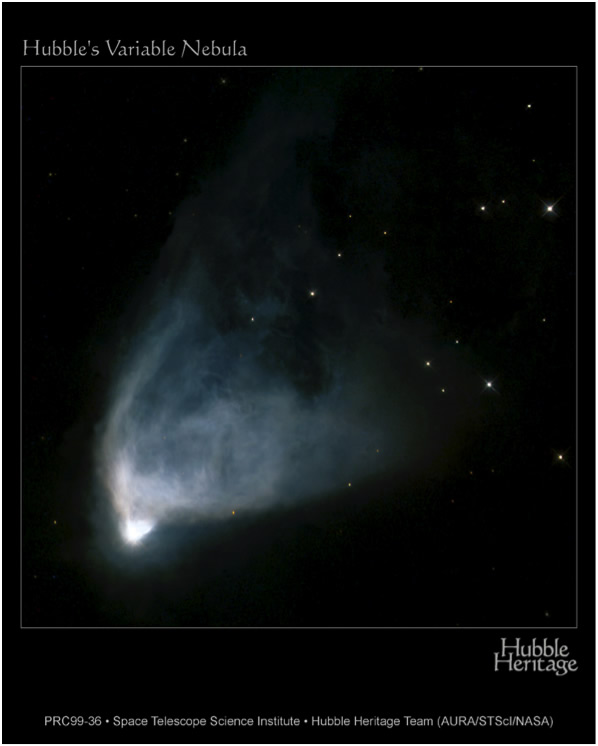 My first-ever view of this object was with a Coulter 17.5 Dobsonian (f/4.5) many years ago and NGC 2261 was far more distinct in the larger instrument; in fact, I was surprised how easy it was to see. Bigger is better!

This month, make sure to locate Hubble's Variable Nebula, and share your observations with Orion's community - either as a "Review" on this article, or in the comments of this article on our Facebook Page.