This faint, five star asterism appears in the constellation of Virgo, and it's sure to become one of your favorite Spring objects.

Have you ever heard of the Virgo Diamond? No... I'm not talking about the large group of stars, comprised of Cor Caroli, Denobola, Spica, and Arcturus, also called the Virgo Diamond. I'm talking about a basically unknown and very tiny asterism in Virgo which makes a beautiful diamond shape, comprised of five faint stars. If conditions are not good this asterism can be difficult to spot, especially the faint companion of the western star.

When I first read about the Virgo Diamond back in 1993, I became immediately interested, and could hardly wait to see it for myself. The Virgo Diamond seems to be as unknown today as it was back in 1993. I know of only a very few amateurs who have observed this most intriguing deep-sky object.

My first observation of the Virgo Diamond came on the night of April 14, 1993. I was using a 10" f/4.5 reflector at 190x which presented a faint grouping of four stars. I was unable to see the fifth star. The stars range in brightness from 10.9 to 13.7 in magnitude. Please don't underestimate this very faint asterism. If conditions are not good, the four primary stars can be difficult, even using a 10".

Since that night in 1993, I have observed this object many times, however, always seeing only the four primary stars.

This changed on the night of April 12, 2012. The conditions were excellent, and using a 10" reflector, I saw the elusive fifth star at a magnification of 266x. I could not hold the fifth companion star constantly, and averted vision was required. I was very excited, after nineteen years I saw the fifth star, finally! It should be noted that excellent seeing and high magnification are essential for observing all components of the diamond.

Tom English of North Carolina, using a 16" SCT described a fabulous view of all five stars using 194x and 387x. Fred Rayworth of Las Vegas, could see the fifth star using a 16" reflector at 130x, but could not hold the faint companion constantly, even from the desert southwest. Sue French of New York could see the faint companion using both a 10" reflector and a 130mm apochromatic refractor, which is the smallest scope that I'm aware of, used to see all five stars. French performed this feat in 2012 at the Winter Star Party. Jaakko Saloranta of Finland, using an 8" reflector, under less than ideal conditions, managed to see the elusive fifth star, even with a focuser that kept freezing up under extreme cold conditions.

The following is a pencil sketch from that special night of April 12th 2012, using only a No. 2 pencil on a blank 5 x 8 note card. The colors were inverted using a scanner. 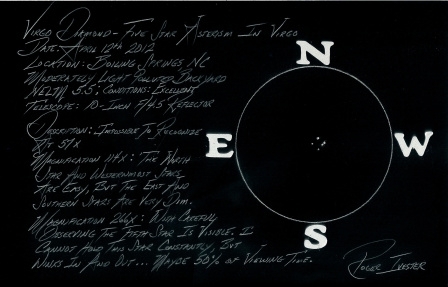 The following image was made by Dr. Don Olive, from the Tzec Maun Observatory in Western Australia, using an Epsilon 180mm corrected Newtonian. 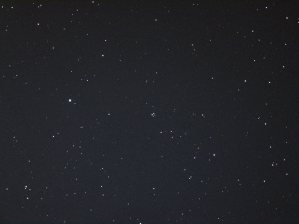 Remember, the Virgo Diamond is a faint and tiny asterism, so a good night and high magnification are essential to see all five stars

Good luck in your quest to see the Virgo Diamond!

Roger Ivester has enjoyed the wonders of the night sky since he was 12 years old. He is a visual observer and enjoys sketching and writing about what he sees. In 2009 he helped start the Las Vegas Astronomical Society Observers Challenge, and works with Fred Rayworth on a monthly basis to compile the report. Roger and his wife Debbie live in the foothills of western North Carolina.