"Ooooooh, I'm getting' too old for this!"

If you're a Dobsonian owner and your scope is less than 12" in aperture, you've probably said that to yourself on more than one occasion.

While a Dob is a fantastic telescope to own, and its affordability and freedom of technical mount parts make it choice for many observers, smaller sizes can sometimes mean big problems: The telescope itself doesn't cause concern, but smaller aperture means becoming a contortionist to use it.

Which one of us hasn't suffered on our hands and knees to aim a 4.5", or regretted having a back when viewing through a 6", Even 8" and 10" models can be very uncomfortable to use for taller individuals. Sure, we've compensated by setting them up on concrete blocks and created not-so-steady risers out of cable spools, but moving and transporting these contraptions can be a real pain in the asteroid!

Orion has come up with a clever and affordable new product called the "Dob Pod." It's a three-legged telescope stand crafted from sturdy, 1" thick melamine-coated particle board, just like your Dobsonian cabinet and painted in basic black. The wide stance of the Dob Pod makes it very stable and you get a full 12" of additional height. It even has cut-outs which align to the cabinet feet, lighten its overall weight and make it much easier to grab and move. What's more, the Dob Pod is compatible with a very wide range of Orion models, from 4.5" to 10" in size. 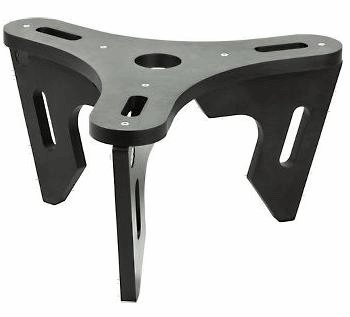 Just imagine... instead of packing around cinder blocks, you can have a stylish cabinet instead! You can stop crouching on that little stool and you can stop leaving your smaller Dobsonian telescope at home when going to a star party because it's uncomfortable to use. You won't need to worry about your back hurting when doing extended viewing, and you'll be far more comfortable (and accurate) when aiming!

The whole world has gone pod crazy... why not add a Dob Pod to your wish list?

Have you tried the new Dob Pod yet? Tell us what you think in the comments!