Now is the Time to See Neptune
Print
Email Friend

Neptune spends most of the year in the constellation Capricornus. On August 11th it reaches opposition and, although low in the sky, this marks the best time to observe the eighth planet from the Sun. 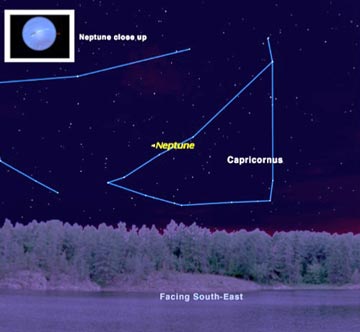 At Neptune's distance, the Sun appears less than 4% as bright as it does at Jupiter. So Neptune is invisible from Earth to the naked eye and a challenge to detect even with a good pair of binoculars. At magnitude 7.7 and featuring a very tiny (2.5 arc-second) bluish disc, at least a six-inch telescope and a magnification of 150x are required to reveal it as a planet.

Neptune's largest moon, Triton, shines with a magnitude of 13 and can be glimpsed in a six-inch telescope but only under near-perfect conditions.