Friday, May 31 - As the skies become dark and the constellation of Leo softly exits west, there is an exquisite galaxy just waiting for you to spot it. To get to it, you'll need to identify slightly fainter Lambda to the southwest of Epsilon and head south about one finger width. Here you'll stumble across a stunning vision: galaxy NGC 2903 (Right Ascension: 9:32.2 - Declination: +21:30).

Discovered by William Herschel in 1784, this oblique spiral galaxy is a little brighter than magnitude 9; easily in range of most binoculars. It is odd that Charles Messier missed this one, considering its brightness and the fact that three of the comets he discovered passed by it... Perhaps it was cloudy when Messier was looking, but we can thank Herschel for cataloging NGC 2903 as H I.56. 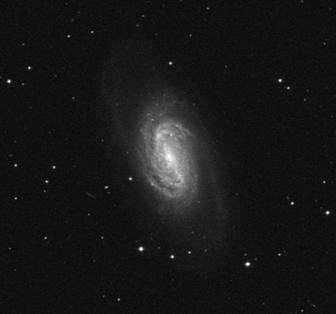 Small optics will perceive this 25 million light-year-distant beauty as a misty oval with a slightly brighter core region, but larger apertures will light this galaxy up. With larger telescopes, the faint suggestions of the galaxy's spiral arms and concentrations will begin to appear. One such knot is star cloud NGC 2905,a detail in a distant galaxy so prominent that it received its designation in the New General Catalogue of Nebulae and Clusters of Stars.

NGC 2903 is roughly the same size as our own Milky Way, and includes a central bar, yet the nucleus of our distant cousin has "hot spots" that were studied by the Hubble Telescope and extensively by the Arecibo telescope in Puerto Rico. While our own galactic halo is filled with ancient globular clusters, this galaxy sports brand new ones! Be sure to mark your notes with your observations, because many different organizations consider NGC 2903 to be on their "Best of" lists. 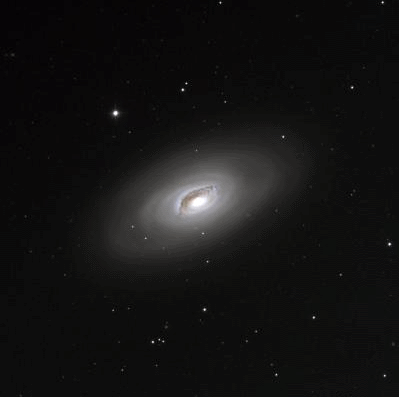 Originally discovered by Bode about a year before Messier cataloged it, M64 holds the distinction of being one of the more massive and luminous of spiral galaxies. It has a very unusual structure, and is classified as an "Sa" spiral in some catalogs and an "Sb" in others.

Overall, the arms of M64 are very smooth, and show no real resolution to any scope, yet its bright nucleus has an incredible dark dustlane that consumes the north and eastern regions around its core-giving rises to its nickname, the Blackeye Galaxy.

Through binoculars, this 8.5 magnitude galaxy can be perceived as a small, nebulous oval with a slightly brighter center. Small telescope users will pick out the nucleus more easily, but will require both magnification and careful attention to dark adaptation in order to catch the dustlane. In larger telescopes, the structure is easily apparent and you may catch the outer wisps of arms on nights of exceptional seeing.

During the Apollo 15 mission, Hadley Rille was visited at a point where it was only 1.6 kilometers wide-still a considerable distance as seen in respect to astronaut James Irwin and the lunar rover. Over a period of time, its lava may have continued to flow through this area, yet it remains forever buried beneath years of regolith.

Now, let's head about four finger widths northwest of Beta Virginis for another unusual star-Omega. Classed as an M-type red giant, this 480 light-year distant beauty is also an irregular variable which fluxes by about half a magnitude. Although you won't notice much change in this 5th magnitude star, it has a very pretty red coloration and is worth the time to view.

Sunday, June 2 - Let's use our binoculars and telescopes and journey to a globular cluster to do a bit of study. We're looking for M3 (Right Ascension: 13:42.2 - Declination: +28:23). You will discover this ancient beauty about halfway between the pair of Arcturus and Cor Caroli- just east of Beta Comae. There's reason to take note of this awesome star cluster.

Discovered by Charles Messier on May 3, 1764, this ball of approximately a half million stars is one of the oldest formations in our galaxy. At around 40,000 light-years away, this intense globular cluster spans about 220 light-years and is believed to be as much as 10 billion years old. To get a grasp on this concept, consider that our own Sun is less than half that age.

Let's further our understanding of distance and how it affects what we see. As you know, light travels at an amazing speed of about 300,000 kilometers per second. To get a feel for this, how many seconds are there in a minute? An hour? A week? A month? How about a year? Ah, you're beginning to see the light! For every second-300,000 kilometers. M3 is 40,000 years away traveling at the speed of light. In terms of kilometers, that's far more zeros than most of us can possibly understand, yet we can still see this great globular cluster. Now let's locate M53 near Alpha Comae. Aim your binoculars or telescopes at this primary star and you will find M53 Right Ascension: 13:12.9 - Declination: +18:10) about a degree northeast. 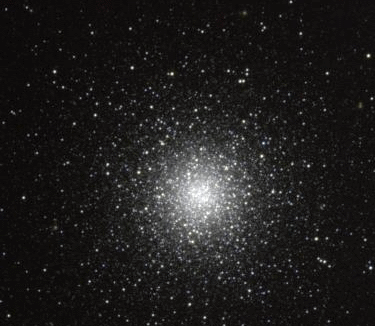 M53 is a rich, magnitude 8.7 globular cluster almost identical to M3, but look at what a difference an additional 25,000 light-years can make as to how we see it.

Binoculars can pick up a small round fuzzy, while larger telescopes will enjoy the compact bright core as well as resolution at the cluster's outer edges. As a bonus for scopes, look one degree to the southeast for the peculiar round cluster NGC 5053 (Right Ascension: 13:16.4 - Declination: +17:42). Classed as a very loose globular, this magnitude 10.5 grouping is one of the least luminous objects of its type due to its small stellar population and the wide separation between members, yet its distance is almost the same as that of M3. Cool, huh?!

Until next week, keep reaching for the stars!