Take your family on a journey to the stars from the comfort of your own backyard! Here are some of Orion's top picks for March stargazing:

Aldebaran hides behind the Moon - On March 4th, bright star Aldebaran will 'disappear' behind the Moon as seen from Earth, during what's called an occultation. Use any telescope or grab your favorite pair of 50mm or larger astronomy binoculars to enjoy this fascinating spectacle as the waxing crescent Moon temporarily covers up the brightest star of the constellation Taurus..

Orion Continues to Shine - Constellation Orion is still well-placed in March skies for telescopic study. Check out bright nebula M42, also called the Orion Nebula, which is visible as the middle "star" of Orion's "sword" just south of the three recognizable stars of Orion's belt. While easily detected in astronomy binoculars, the wispy Orion Nebula will reveal more intricate details in a telescope. After March, our namesake constellation will get lower and lower in the west, making it harder to see as the Sun moves eastward in the sky.

Brilliant Binocular Clusters - Grab a pair of astronomy binoculars in March for great views of the Pleiades star cluster (M45), the Beehive cluster (M44), and the must-see Double Cluster in Perseus. These sparkling sky gems are simply beautiful when observed with big binoculars, or use a wide-field telescope for a closer look.

Galaxies Galore - By about 9-10pm throughout March, Ursa Major, Leo, and the western edge of the Virgo galaxy cluster are high enough in the eastern sky to yield great views of some of our favorite galaxies. Take advantage of the New Moon on March 28th and set sail for these island universes with a big telescope. Check out the bright pair of M81 and M82 just above the Big Dipper asterism. Look east of bright star Regulus in Leo to observe M65, M66, and NGC 3628. In the northeastern sky, check out the famous Whirlpool Galaxy (M51). While the Whirlpool can be seen with modest 50mm binoculars, using a 10" or 12" telescope in a location with dark skies will display the distant galaxy's beautiful spiral arms. With an 8" or larger telescope and a dark sky this region of the sky harbors dozens of galaxies ? try to find them all!

New Moon, Dark Skies - Take advantage of the dark skies provided by the New Moon on March 28th to scope out the many star clusters, galaxies and other deep-sky gems March has to offer.

Celestial Triangle - On March 29th immediately following sunset, the brand-new crescent Moon and planets Mars and Mercury will form a large triangle above the western horizon. This gives stargazers a welcome opportunity to spot elusive Mercury as it shares the early evening sky with the Red Planet and thin crescent Moon. You don't need a telescope to see this pretty grouping!

Challenge Object, NGC 2419, "The Intergalactic Wanderer" - In the constellation Lynx, from a location with dark skies using a good 4.5" or larger telescope, try to find globular cluster NGC 2419. To make this star cluster easier to locate, we suggest a 6 or 8" telescope, but a larger telescope is needed to resolve the cluster into individual stars. NGC 2419 is a very distant cluster located approximately 300,000 light-years from the galactic center of the Milky Way, which is almost twice as far away as the Large Magellanic Cloud satellite galaxy. In fact, the star cluster earned its "Intergalactic Wanderer" nickname when its distance caused astronomers to mistakenly think the cluster wasn't part of the Milky Way galaxy.

Talented astrophotographer and Orion customer Wynn M. captured this beautiful image of three galaxies that can be found in the constellation Leo; M65, M66 and NGC 3628. Both M65 and M66 are spiral galaxies while NGC 3628 is a barred spiral galaxy whose appearance has earned it the "hamburger galaxy" nickname. Wynn combined and processed 49 separate 300-second exposures to reveal intricate details. Thanks for the exquisite image, Wynn! 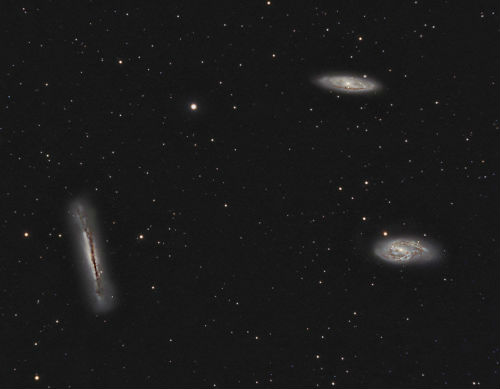