Friday, September 20 - This evening we'll be racing ahead of the rising Moon, because on this night in 1948, the 48" Schmidt telescope at Mt. Palomar was busy taking pictures. The first photographic plate was being exposed on a galaxy by the same man who ground and polished the corrector plate for this scope - Don Hendricks. His object of choice was reproduced as panel 18 in the Hubble Atlas of Galaxies and tonight we'll join his vision as we take a look at the fantastic M31 - the Andromeda Galaxy. 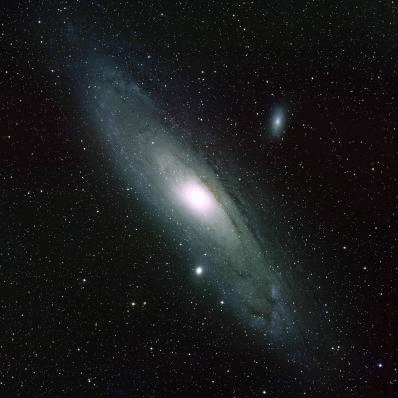 Seasoned amateur astronomers can literally point to the sky and show you the location of M31 (Right Ascension: 0:42.7 - Declination: +41:16), but perhaps you have never tried. Believe it or not, this is an easy galaxy to spot even under the moonlight. Simply identify the large diamond-shaped pattern of stars that is the "Great Square of Pegasus." The northernmost star is Alpha, and it is here we will begin our hop. Stay with the north chain of stars and look four finger-widths away for an easily seen star. The next along the chain is about three finger-widths away... And we're almost there. Two more finger-widths to the north and you will see a dimmer star that looks like it has something smudgy nearby. Point your binoculars there, because that's no cloud - it's the Andromeda Galaxy!

For more information on Andromeda, read our Observer's Guide to Andromeda.

Saturday, September 21 - And what was Sir William Herschel doing on this date a couple of centuries ago? You can bet he was out telescoping; and his discoveries on this night were many. Let's take a look at two of his studies logged on September 21 which made the Herschel "400" list.

Our first stop is northern Cygnus for NGC 7086 (RA 21 30 30 Dec +51 35 00). Located on the galactic equator about five degrees west of Beta Cephei, our target is an open cluster. At magnitude 8.4, this loose collection will be difficult for the smaller scope, and show as not much more than an arrow-like asterism. However, larger scopes will be able to resolve many more stars, arrayed in long loops and chains around the brighter members. Although it's sparse, NGC 7086 has been studied for metal abundance, galactic distance, membership richness, and its luminosity function. Be sure to mark your notes for H VI.32, logged by Herschel in 1788.

Now hop on over to Andromeda for NGC 752 (RA 01 57 41 Dec +37 47 06). You'll find it just a few degrees south of Gamma and in the field north of star 56. Located 1300 light-years away, there's a strong possibility this cluster was noted first by Hodierna before being cataloged by Herschel on this night (1786). At near magnitude 5, this "400" object is both large and bright enough to be seen in binoculars or small telescopes, and people have often wondered why Charles Messier did not discover it. The star-studded field contains about 70 members of various magnitudes belonging to H VII.32 - a very old cluster which has more recently been studied for its metallicity and the variations in the magnetic fields of its members. Enjoy them both tonight! Sir William did... 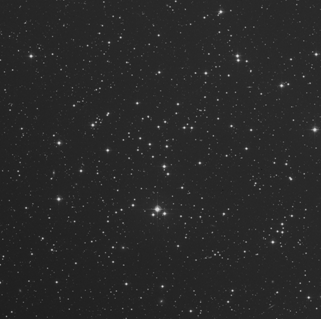 Sunday, September 22 - Tonight we'll return again to Vulpecula - but with a different goal in mind. What we're after requires dark skies - but can be seen in both binoculars and a small telescope. Once you've found Alpha, begin about two fingerwidths southeast and right on the galactic equator you'll find NGC 6823 (Right Ascension: 19:43.1 - Declination: +23:18).

The first thing you will note is a fairly large, somewhat concentrated magnitude 7 open cluster. Resolved in larger telescopes, the viewer may note these stars are the hot, blue/white variety... and for good reason. NGC 6823 only formed about 2 billion years ago. Although it is some 6000 light-years away and occupies around 50 light-years of space, it's sharing the field with something more - a very large emission/reflection nebula, NGC 6820 (Right Ascension: 19:43.1 - Declination: +23:17). 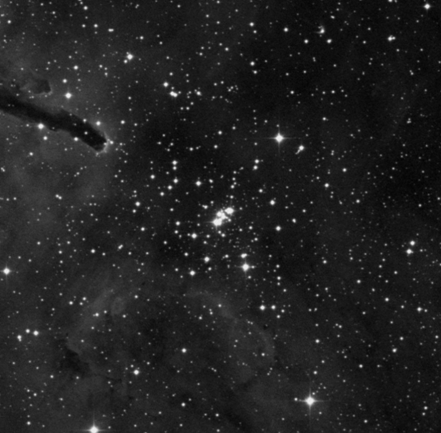 In the outer reaches of the star cluster, new stars are being formed in masses of gas and dust as hot radiation is shed from the brightest of the stellar members of this pair. Fueled by emission, NGC 6820 isn't always an easy visual object - it is faint and covers almost four times as much area as the cluster. But trace the edges very carefully, since the borders are much more illuminated than the region of the central cluster. Take the time to really observe this one. Its processes are very much like those of the "Trapezium" area in the Orion nebula. Be sure to mark your observing notes. NGC 6823 is Herschel VII.18 and NGC 6820 is also known as Marth 401!

Discovered by Sir William Herschel on Oct 15, 1784, and logged as H VIII.23, this intermediate aged galactic cluster will blow your mind in larger aperture. Visible in binoculars, as size increases the field explodes into about 100 stars in a highly compressed, rich cloud. Although it is not an often visited cluster, it is part of many observing challenge lists. Use low power to get the full effect of this stunning starfield!

Until next week, wishing you clear skies!