Tonight we'll launch our imaginations as we view the area around Mare Crisium and have a look at this week's lunar challenge - Macrobius. You'll find it just northwest of the Crisium shore. Spanning 64 kilometers in diameter, this Class I impact crater drops to a depth of nearly 3,600 meters - about the same as many of our earthly mines. Its central peak rises up 1,100 meters, and may be visible as a small speck inside the crater's interior. Be sure to mark your lunar challenge notes and look for other features you may have missed before!

Now, relax and let's talk until the Moon sets...

As we know most stars begin life in stellar nurseries and end life either alone or in very small groups as doubles or multiple stars. Tonight we can have a look at a group of young stars beginning their stellar evolution and end with an old solitary elder preparing to move on to an even "higher realm." 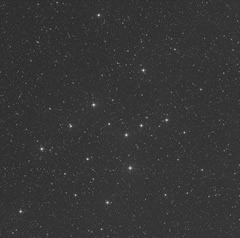 Open cluster IC 4665 (Right Ascension: 17:46.3 - Declination: +05:43) is easily detected with just about any optical aid about a finger-width north-northeast of Beta Ophiuchi. Discovered by Philippe Loys de Cheseaux in the mid-1700's, this 1,400 light-year distant cluster consists of about 30 mixed magnitude stars all less than 40 million years of age. Despite its early discovery, the cluster did not achieve broad enough recognition for Dreyer to include it in the late 19th century New General Catalog and it was later added as a supplement to the NGC in the Index Catalog of 1908. Be sure to use low power to so see all the stars of this large group.

About three finger-widths north-northeast of IC 4665 is a study that did make Dreyer's catalogue: NGC 6572 (Right Ascension: 18:12.1 - Declination: +06:51). This 9th magnitude planetary nebula is very small - but intense. Like the "Cat's Eye" in Draco and NGC 6210 in Hercules, this planetary nebula can withstand high magnification. Those with large scopes should look for a small, round blue inner core encased in a faint shell. A challenge to find? You bet. Worth the work? You tell me.

With plenty of Moon to explore tonight, why don't we try locating an area where many lunar exploration missions made their mark? Binoculars will easily reveal the fully disclosed areas of Mare Serenitatis and Mare Tranquillitatis, and it is where these two vast lava plains converge that we will set our sights. Telescopically, you will see a bright "peninsula" westward of where the two conjoin, and extending toward the east. Just off that, look for bright and small crater Pliny. It is near this rather inconspicuous feature that the remains of Ranger 6 lie forever preserved where it crashed on February 2, 1964.

Unfortunately, technical errors occurred and it was never able to transmit lunar pictures. Not so with Ranger 8! On a very successful mission to the same relative area, we received 7,137 "postcards from the Moon" in the last 23 minutes before hard landing. On the "softer" side, Surveyor 5 also touched down near this area safely after two days of malfunctions on September 10, 1967. Incredibly enough, the tiny Surveyor 5 endured temperatures of up to 283 degrees F, but was able to spectrographically analyze the area's soil. It also managed to televise an incredible 18,006 frames of "home movies" from its distant lunar locale.

Tonight take on another lunar challenge as we look mid-way along the terminator at the west shore of Mare Tranquillitatis for crater Julius Caesar. 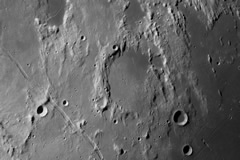 This is a ruined crater, but it met its demise, not through lava flow - but from a cataclysmic event. The crater is 88 kilometers long and 73 kilometers wide. Although its west wall still stands over 1,200 meters high, look carefully at the east and south walls. At one time, something plowed its way across the lunar surface, breaking down Julius Caesar's walls and leaving them to stand no higher than 600 meters at the tallest.

While visiting the "Tranquil Sea," look for the unusually shaped crater Hypatia. Can you spot its rima on the southern shore of Tranquillitatis? Perhaps the bright pockmark of Moltke on its north edge will help. Hypatia sits on the northern shore of a rugged area known as Sinus Asperitatis. Do you see Alfraganus on the terminator? Follow the terrain to Theophilus and look west for Ibyn-Rushd with crater Kant to the northwest and the beautiful peak of Mons Penck to its east.

Tonight let's have a look with our eyes first at Delta Ophiuchi. Known as Yed Prior (the Hand), look for its optical double Epsilon to the southeast: Yed Posterior. Now have a look in binoculars or a telescope at absolute minimum power for another undiscovered gem...

Delta Ophiuchi is 170 light-years from us, while Epsilon is 108 - but look at the magnificent field they share. Stars of every spectral type are in an area of sky which could easily be covered by a small coin held at arm's length. Enjoy this fantastic field - from the hot, blue youngsters to the old red giants!

Until next week? Ask for the Moon, but keep on reaching for the stars!