Friday, June 14 - Tonight let's begin with an historic lunar journey to the southwest edge of Tranquillitatis and visit with the Apollo 11 landing area. Although we can never see the "Eagle" telescopically, we can find where it landed. For telescopes and binoculars, the landing area will be found near the terminator along the southern edge of Mare Tranquillitatis. No scope? No problem. Find the dark round area on the lunar northeastern limb - Mare Crisium. Then locate the dark area below that, Mare Fecundatatis. Now look mid-way along the terminator for the dark area that is Mare Tranquillitatis. The bright point west where it joins Mare Nectaris further south is the target for the first men on the Moon. We were there! 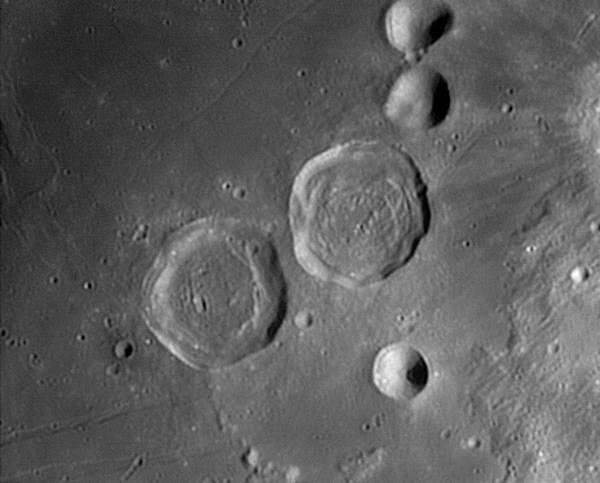 Telescopically, start tracing the western wall of Tranquillitatis and looking for the small circles of craters Sabine and Ritter. Once located, switch to your highest magnification. Look in the smooth sands to the east to see a parallel line of three tiny craters. From west to east, these are Aldrin, Collins, and Armstrong - the only craters to be named for the living. It is here where Apollo 11 touched down, forever changing our perception of space exploration.

While the Moon's glare will make it difficult to do many things, we can still have a look at other bright objects! Let's start tonight by going just north of Zeta Bootes for Pi. With a wider separation, this pair of white stars will easily resolve to the smaller telescope. Now skip up northeast about a degree for Omicron Bootes. While this is not a multiple system, it makes a nice visual pairing for a binocular challenge. For telescopes, the southeastern star holds interest as a small asterism. Continue northeast another two degrees to discover Xi Bootes. This one is a genuine multiple star system with magnitude 5 and 7 companions. Not only will you enjoy this G-type sun for its duplicity, but for the fine field of stars in which it resides! 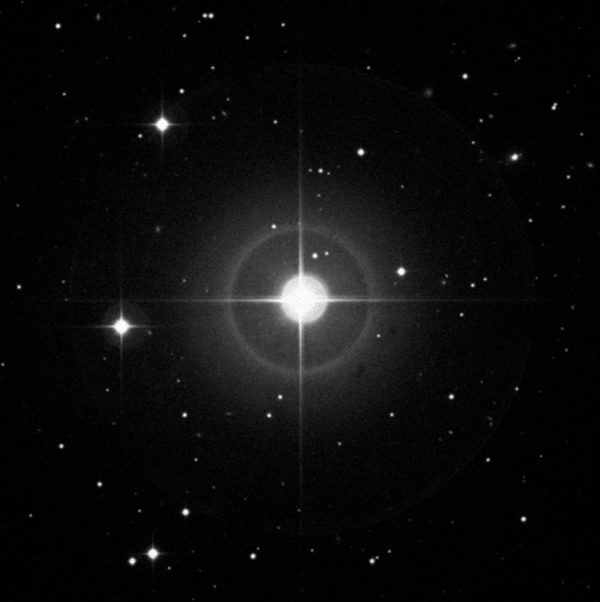 Saturday, June 15 - Tonight we will begin our lunar explorations as we look to the Moon's far north and identify the "Sea of Cold" - Mare Frigoris. This long, vast lava plain extends 1126 kilometers across the surface from east to west, yet never ranges more than 72 kilometers from north to south. Look for the unmistakable dark ellipse of landmark crater Plato caught on Frigoris' southern central shore. 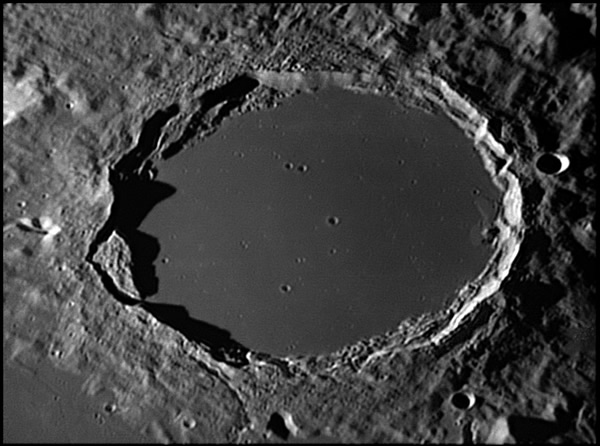 Named after the famous philosopher, this mountain-walled plain with a dark floor is a Class V crater. Its slightly oval shape spans approximately 101 kilometers in diameter but is a shallow 1 kilometer deep - appearing far more elliptical due to its northern latitude. Plato's floor is its most curious feature. Consisting of 2,700 square miles of unique lava, and only broken by a couple of very minor and supremely challenging craters, Plato is one of the very few areas on the lunar surface that seems to have changed in recent history. The bright rim of Plato's enclosure is very ragged and can rise as high as 2 kilometers above the surface, casting unusual shadows on the lava covered floor. At around 3 million years old, Plato is more ancient than Mare Imbrium to its south. For 300 years astronomers have been keeping a watchful eye on this crater. Hevelius called it the "Greater Black Lake," due its low albedo (surface reflectivity). Despite its dark appearance, Plato is well known as a home for lunar transient phenomena such as flashes of light, unusual color patterns and areas that could be outgassing. Enjoy this lunar feature which will point the way to others in the future!

Now let's head about four finger widths northwest of Beta Virginis for another unusual star - Omega. Classed as an M-type red giant, this 480 light-year distant beauty is also an irregular variable which fluxes by about half a magnitude. Although you won't notice much change in this 5th magnitude star, it has a very pretty red coloration and is worth the time to view.

Sunday, June 16 - Let's begin our lunar studies tonight with a deeper look at the "Sea of Rains." Our mission is to explore the disclosure of Mare Imbrium, home to Apollo 15. Stretching out 1123 kilometers over the Moon's northwest quadrant, Imbrium was formed around 38 million years ago when a huge object impacted the lunar surface creating a gigantic basin.

The basin itself is surrounded by three concentric rings of mountains. The most distant ring reaches a diameter of 1300 kilometers and involves the Montes Carpatus to the south, the Montes Apenninus southwest, and the Caucasus to the east. The central ring is formed by the Montes Alpes, and the innermost has long been lost except for a few low hills which still show their 600 kilometer diameter pattern through the eons of lava flow. Originally the impact basin was believed to be as much as 100 kilometers deep. So devastating was the event that a Moon-wide series of fault lines appeared as the massive strike shattered the lunar lithosphere.

Imbrium is also home to a huge mascon, and images of the far side show areas opposite the basin where seismic waves traveled through the interior and shaped its landscape. The floor of the basin rebounded from the cataclysm and filled in to a depth of around 12 kilometers. Over time, lava flow and regolith added another five kilometers of material, yet evidence remains of the ejecta which was flung more than 800 kilometers away, carving long runnels through the landscape. 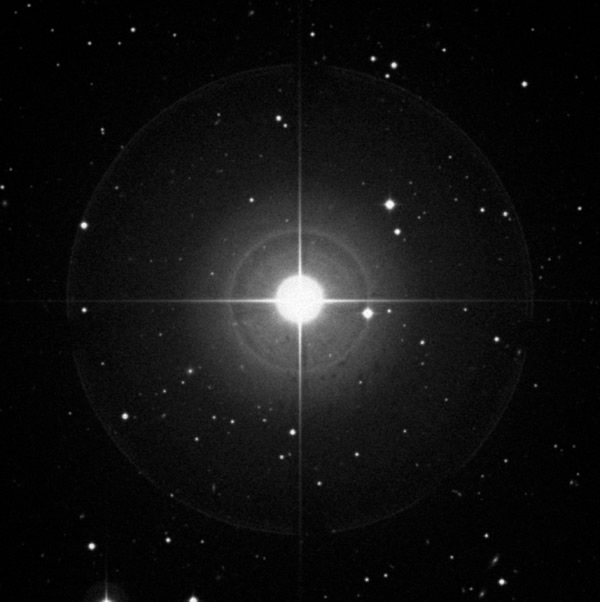 Before we hang up our eyepieces for the night, let's add to our double star list as we hunt down Zeta Bootes located about 7 degrees southeast of Arcturus. This is a delightful multiple star system for even small telescopes.

Don't forget to come back and tell us what you were able to see in the comments section below!

Until next week, Ask for the Moon, but keep on reaching for the stars!