Tonight before moonrise, let's have a look at a real little power-punch globular cluster located in northern Lupus - NGC 5824. Although it's not an easy star hop, you'll find it about 7 degrees southwest of Theta Librae and exactly the same distance south of Sigma Librae (RA 15 03 58.50 Dec -33 04 03.9). Look for a 5th magnitude star in the finder scope to guide you to its position southeast. 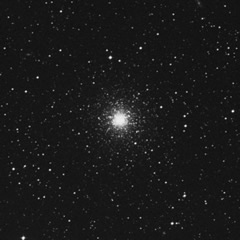 As a Class I globular cluster, you won't find any other that is more concentrated than NGC 5824. Holding a rough magnitude of 9, this little beauty has a deeply concentrated core region that is simply unresolvable. Discovered by E. E. Barnard in 1884, it enjoys its life in the outer fringes of the galactic halo about 104 light-years away from Earth, and contains many recently discovered variable stars. Oddly enough, this metal poor globular may have been formed by a merger. In researching evidence found about NGC 5824's stellar population, it is believed that two less dense and differently-aged globulars may have approached one another at a low velocity and combined to form this ultra-compact structure.

Be sure to mark your observing notes on this one! It also belongs to the Bennett catalog and is part of many globular cluster studies. Enjoy...

Tonight let's have a look at things gravitationally bound as we start at Eta Lupi, which is a fine double star that can even be resolved with binoculars. Look for the 3rd magnitude primary and 8th magnitude secondary separated by a wide 15". You'll find it by starting at Antares and heading due south two binocular fields to center on bright H and N Scorpii - then one binocular field southwest.

When you are done, hop another roughly five degrees southeast to encounter the fine open cluster NGC 6124 (Right Ascension: 16:25.6 - Declination: -40:40). Discovered by Louis Lacaille, and known as object I.8, this 5th magnitude open cluster is also known as Dunlop 514, as well as Melotte 145 and Collinder 301. Situated about 19 light-years away, it will show as a fine, round, faint spray of stars to binoculars and resolve into about 100 stellar members to larger telescopes.

While NGC 6124 is on the low side to northern observers, it's worth waiting for it to hit best position to give it a try. Be sure to mark your notes, since this delightful galactic cluster is a Caldwell object and a southern skies binocular award. Did you see it? Let us know your impressions of this open cluster in the comments.

Tonight for unaided observers, let's begin by identifying Zeta Ophiuchi, the centermost star in a line of stars marking the edge of the constellation of Ophiuchus, about a handspan north of Antares. As a magnificent 3rd magnitude blue/white class O, this hydrogen fusing dwarf is 8 times larger than our own Sun!Hanging out some 460 light-years away, it is dulled by the interstellar dust of the Milky Way and would shine two full magnitudes brighter if it were not obstructed. Zeta is a "runaway star" - a product of a one-time supernova event in a double star system. Now roughly halfway through its 8 million year life span, the same fate awaits this star!

Now, point your binoculars or small scopes about three fingerwidths south to have a look at Phi Ophiuchi. This is a spectroscopic double star, but it has several delightful visual companions!

Almost in between these two bright stars is our telescopic target for tonight - M107 (Right Ascension: 16:32.5 - Declination: -13:03). Discovered by Pierre Mechain in 1782, but only added to the Messier catalog in 1947, it's probably one of the last of the Messier objects to be discovered, and it wasn't resolved into individual stars until studied by Herschel in 1793.

M107 isn't the most impressive of globulars, but this Class X is notable as a faint, diffuse area with a core region in binoculars, and is surprisingly bright in a small telescope. It's a curious cluster, for some believe it contains dark, dust-obscured areas which make it unusual. Located around 21,000 light-years away, this little beauty contains around 25 known variable stars. Visually, the cluster begins to resolve around the edges to mid-aperture and the structure is rather loose. If sky conditions permit, the resolution of individual chains at the globular's edges make this it well worth a visit to log as Herschel IV.40!

Until next week, wishing you clear skies...