One of the more useful and cost-effective tools in an amateur astronomer's accessory case is a Barlow lens. Invented in the early 1800s by British mathematics professor Peter Barlow, it is a simple concave (negative) lens that, when placed between a telescope's objective lens or mirror and the telescope eyepiece, amplifies the magnifying power of the instrument. 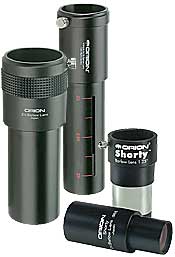 A Barlow lens is useful in several ways. First, it allows you to reach a higher maximum power. This is not always very beneficial, however, because the maximum useful power is generally limited not by the telescope or eyepiece but by prevailing atmospheric conditions ("seeing"). If atmospheric turbulence renders the image wavy and fuzzy at 150x, doubling the power to 300x is not going to help; it?ll only degrade the image even more.

A less obvious but very nice perk of Barlow lenses is that they can make high-power viewing through a telescope more comfortable. High-power (short-focal-length) eyepieces often have very little eye relief, which requires that you position your eye very close to the lens to see the image comfortably. But a Barlow lens allows you to achieve the same magnification with a lower-power eyepiece, which typically has more eye relief. This can be a real benefit for eyeglass wearers, enabling them to see the whole field of view at higher powers, when normally they cannot. Also, many high-power telescope eyepieces feature very small eye lenses, which can be difficult to look into. Using a Barlow lens with a longer focal length telescope eyepiece allows you to enjoy the same magnification, but with a larger and more comfortable eye lens to peer into.

A 2x Barlow lens will actually provide 3x magnification when placed in front of the telescope diagonal on refractor, Schmidt-Cassegrain and Maksutov-Cassegrain telescopes.

Lastly, a precision-made Barlow with antireflection coatings can actually improve eyepiece performance, providing sharper images and reducing edge-of-field optical aberrations at the expense of only a two or three percent reduction in image brightness. In fact, many deluxe high-power eyepieces contain built-in Barlow lens elements to achieve their high magnifications.

Barlows also come in different magnifications. The most common Barlow magnification is 2x, which means that it doubles the power of any eyepiece with which it's used. There are also 3x and 5x Barlows available, and even some in-between magnifications such as 1.5x and 2.5x.

A 2x Barlow lens provides 2x magnification when placed between the telescope diagonal and eyepiece.

Make sure you get a quality Barlow lens that is fully antireflection coated or fully multi-coated. Most cheap Barlows included with low-end department-store telescopes are virtually worthless due to their lack of antireflection coating and resulting poor performance.

Using a Barlow Lens
A Barlow is very simple to use: It is inserted in place of the telescope eyepiece in the focuser, and the eyepiece is then inserted into the Barlow itself. When the Barlow is inserted into the optical path you will need to refocus, and often the change of focus required is quite large. To avoid excessive refocusing, therefore, you may find it easiest to sequence through your eyepieces without the Barlow, then, if the object and conditions warrant higher power, insert the Barlow and run through your eyepieces again starting with the longest focal-length (lowest power) eyepiece. As with all visual observing, don?t increase magnification to the point that the image becomes fuzzy. Once the image becomes fuzzy there is no more detail to be seen, and such empty magnification makes it more difficult to discern detail in celestial sights.

Use of a Barlow should be factored into your choice of telescope eyepieces. If you're just starting out, you'll find that most telescopes come with a single low-power eyepiece, often of about 25mm focal length or thereabouts. A good strategy is to purchase a 2x Barlow and a second eyepiece of about 1/3 the focal length of your first telescope eyepieces. (For example: if your first eyepiece is a 25mm eyepiece, your second eyepiece would therefore be in the range of 8mm to 10mm). Those two telescope eyepieces and a single 2x Barlow lens will give you a range of four different magnifications, from low power to relatively high power — a very good way to get started!