Let's work this weekend in a smaller area of sky, for ease of star hopping to four interesting targets. We'll vary them a bit, visiting two big local galaxies, a highly detailed planetary nebula, and an interesting variable star. Here is the area of the sky we'll cover; from Andromeda, into Triangulum, and then to Perseus: 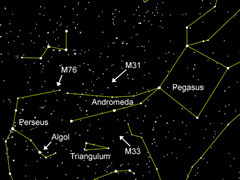 M31 is a nice hop from Beta, the brightest star in Andromeda, up to the next bright star up, then up again the same distance. In binoculars M31 is unmistakable, and will appear as a decently bright, elongated fuzzy spot.

M33 is about a third of the distance from the point of Triangulum to Beta Andromeda, and a touch west.

M76 is at the end of the chain of stars that define one long leg of Andromeda. And Algol, the great variable star, is easy to locate behind the shape of Triangulum.

So let's look at them! 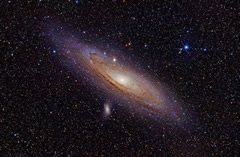 The Andromeda Galaxy is the big sister to our own Milky Way, and is a great target whether in binoculars or any size telescope. M31 is huge. If you follow its major axis from edge to visible edge, you'll have traversed six times the diameter of our full Moon. Tremendous! The Andromeda Galaxy is even visible to the unaided eye, given dark enough skies. It was one of the very first objects detected by the ancients. The Greeks referred to it (and other such objects) as a nebula, meaning "little cloud." Under dark skies, you'll see a number of features in Andromeda. Can you find the two sweeping dark lanes define its northern edge?

NGC 206, is a bright cluster of blue supergiant stars (visible in the above image) in its southwestern section. Two close-by satellite galaxies are also visible: M32, as a tight, small elliptical galaxy south of M31's core, and M110, a loose spiral floating nearby to the north 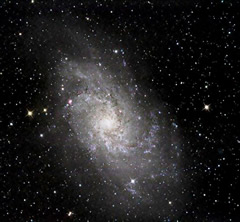 M33, or the Triangulum Galaxy, is another member of our local group of 30 galaxies. At a distance of 3 million light years, M33 is relatively close, and very large, but it appears dim. While it can be viewed without optical aid with good night vision in a dark sky, it is easy to see in a pair of binoculars as a distinct fuzzy patch. When viewed in a telescope you can see its main spiral arms, and several "HII" regions - areas of ionized hydrogen that are forming new stars, similar to our Orion Nebula. The brightest HII region has its own entry in the NGC (New General Catalog) - NGC 604, appearing as a bright knot. 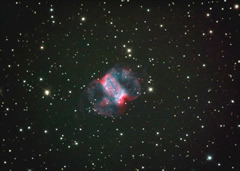 At the end of one the two chains of stars that form the constellation Andromeda, and just into Perseus, is this beautiful and highly detailed planetary nebula, known as The Little Dumbbell. Its shape is distinct, and while it can be glimpsed in binoculars, it is relatively small, so the more aperture you have the more detailed its structure will appear. Much of the detail in this photo, other than colors, can be viewed through your eyepiece. A ten inch or larger instrument using an Orion Ultrablock filter will provide the most pleasing views. The Little Dumbbell is estimated at 2,500 light years distant, and gives us a view of our own Sun's future final stages. 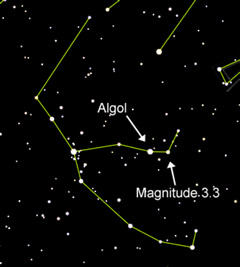 This star, Beta Persei, is also known as the "Demon Star," and thought to be the eye of the Medusa. Algol is actually a triple star system. The brightest "A" component is eclipsed every 20 hours and 49 minutes by the "B" star. The result is a visible magnitude change from a near constant 2.1, to magnitude 3.4 when eclipsed. You can see this and gauge its brightness, using the nearby magnitude 3.3 star Rho Persei. Certainly we all can understand how bothersome, puzzling, and frightening, this sight may have been to the ancients, when teachings were that the heavens were unchangeable. Watch this star over a week, and see the changes for yourself.

Mark Wagner is a life-long astronomy enthusiast and deep sky observer. He has spent the past twenty years popularizing amateur astronomy in the San Francisco bay area through his writing and community building. A past president of the San Jose Astronomical Association, he founded what is now the annual Golden State Star Party in California. Please post if you have comments, questions, sketches or images you've taken of the targets mentioned above.