A revolution that began with colliding neutron stars is taking place in astronomy. Will Gater looks at how electromagnetic and gravitational wave observations are expanding our view of the cosmos. 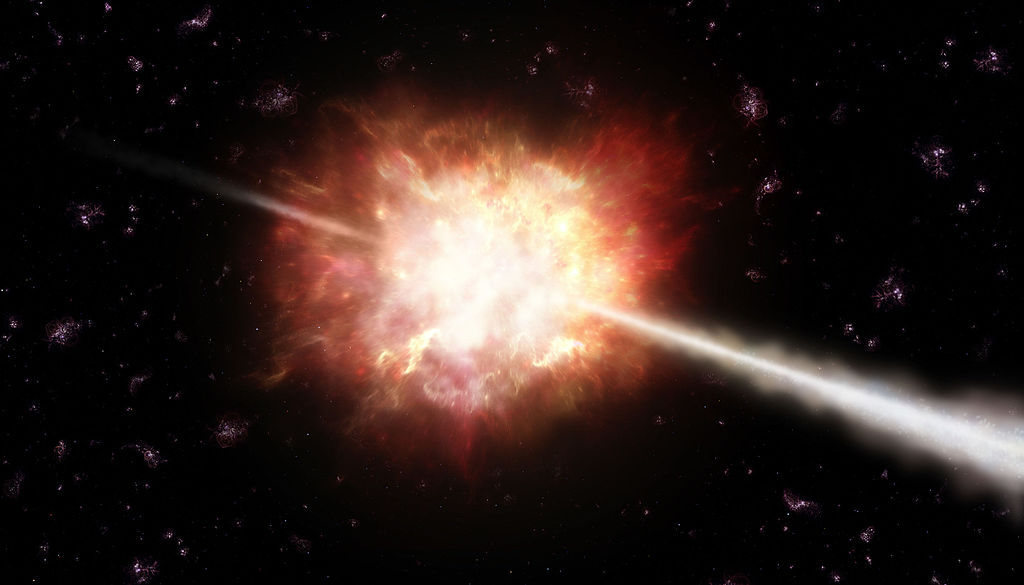 Every so often, a true moment of scientific insight comes along, a moment that has a profound impact on how we explore the Universe. One such moment came in 2015 with the first detection of gravitational waves — ripples in the fabric of space-time that propagate from moving celestial bodies and violent events such as the merging of two black holes or neutron stars.

But despite the astronomical possibilities gravitational waves grant us, it was another, more recent, observation that opened up a new field of space science. That new field is multi-messenger astronomy, in which the secrets of the Universe are revealed through detecting and observing not only electromagnetic radiation, but gravitational waves and other celestial phenomena too. And its story begins around lunchtime, in August last year.

At 12:41 UT on 17 August 2017, the Laser Interferometer Gravitational-wave Observatory (LIGO) detectors in Washington and Louisiana, USA, sensed a gravitational wave washing over their respective sites. What happened next would thrill researchers and set off a dramatic chain of events.

"Less than a minute after the gamma-ray [burst] was picked up by the Fermi team, they notified everyone else that they'd seen something interesting and gave a rough sky map of the location," recalls Dr. Michalis Agathos, a LIGO-Virgo Collaboration researcher based at the University of Cambridge.

The scramble to correlate

As news of the gamma-ray burst started to reach astronomers around the world, the LIGO researchers were already analyzing the wave their detectors had sensed, which they'd now catalogued as GW170817. Like the Fermi and INTEGRAL teams, the LIGO researchers notified collaborators at astronomical organizations around the world with access to telescopes observing across practically the entire electromagnetic spectrum.

"We already knew that the Fermi team had circulated [news of the Gamma-rays] so everyone at LIGO worked hard to get [details of GW170817] out fast with as much accurate information as possible," says Agathos.

Using data from a third detector, Virgo in Italy, the researchers were able to narrow down the area of the sky that GW170817 had come from. "When we cross-checked our sky map with that of Fermi, which was relatively wide but still narrowed down the location to a few hundred square degrees, we noticed a significant overlap. That encouraged people to believe that this was something that may be picked up by other telescopes," says Agathos.

On the ground, the professional observatories in Chile slewed towards the area specified by the LIGOVirgo team, picking out a new pinprick of light in NGC 4993, a galaxy around 130 million lightyears away. Meanwhile in orbit, both the Hubble Space Telescope and NASA's Swift satellite spotted it too, while the Chandra X-ray Observatory would later detect X-rays streaming from the same location. One estimate from the European Southern Observatory suggests that around 70 observatories saw the glowing dot that had appeared in the distant galaxy. More significant than the large number of eyes on the new spot of light, however, is what the diversity of observations constituted.

For the very first time, researchers had caught both electromagnetic radiation and gravitational waves emanating from an astronomical phenomenon. And with the data they'd amassed, the science of multimessenger astronomy — of studying distant celestial objects by examining more than just the light they emit — took a vast leap forward.

As had long been hoped, decades of technological improvements had brought gravitational wave detection to the point where it could work in concert with all kinds of observatories to provide astronomers with a new way to scrutinize astrophysical processes. And nowhere was this better demonstrated than in the revelations that came from the analysis of the GW170817 event.

Looking beyond the wave

"The data that we see in [a] gravitational wave detection is in a waveform," says Agathos. "You can see it as a wave that evolves in a certain way and the structure of it gives you information about the source that generated it."

Analysis of the GW170817 gravitational wave suggested that the event which had produced it was a violent collision between two neutron stars that had been spiraling in towards each other. When the two stars finally collided, the force of the impact shuddered the fabric of space-time, sending the gravitational wave rippling across the cosmos. It also illuminated their host galaxy with a powerful blast of radiation — the light the world's telescopes picked up in August.

The identification of a neutron star binary system as the origin of GW170817 was important in itself. The initial flash that the Fermi telescope saw was a phenomenon known as a short gamma-ray burst. Short gamma-ray bursts had been observed many times prior to the GW170817 event and one of the theories that astronomers had put forward for what causes them was the merging of neutron stars.

With Fermi's observation of the short gamma-ray burst and a simultaneous detection of a gravitational wave produced by a collision of neutron stars, astronomers now had a key piece of evidence to support that theory.

This revelation from the study of the GW170817 gravitational wave was the first triumph of multimessenger astronomy, but it wasn't the only one. The telescopes observing the electromagnetic radiation from the explosion caused by the two neutron stars colliding were able to capture spectra of the event. In doing so they were able to shed light on one of the great enigmas in astrophysics: where some of the heaviest elements in the Universe come from.

"Once you have the spectrum you can infer things about the [chemical] composition of the matter that you're observing," says Agathos. "The fact that we saw spectral lines of certain elements in this detection indicated that a big portion of elements, such as gold, platinum, uranium or other heavy elements, [are] actually produced in this type of process. This had been an open question for decades."

Those heavy elements were flung out by the explosion observed by the follow-up telescopes &mash a powerful blast known as a 'kilonova', which astronomers had for many years suspected would occur when two neutron stars smash together. Kilonovae are fainter and release less material than supernovae, but as they dim rapidly they're much more tricky to catch.

"Sometimes you can see objects that have characteristics which would have looked like the theoretical models put forward for a kilonova," says Dr Kate Maguire, an expert in supernovae from Queen's University, Belfast. "But because they fade away very quickly from their brightness we never had good datasets."

Indeed, the multi-messenger nature of the GW170817 observations was crucial to positively identifying it as the kilonova predicted by models. "This is the first object that's conclusively a kilonova, because we have the gravitational wave detection of the two neutron stars merging," adds Maguire.

Astronomers hope to make more multi-messenger observations of kilonovae in order to get a better understanding of these events. But future multimessenger astronomy studies may also offer new insight into their more energetic cousins, supernovae, as well. And that's because there's another type of 'messenger' to pick up, a messenger that wasn't detected in the GW170817 event but one that could reveal the inner workings of these violent stellar detonations: neutrinos.

Neutrino particles can be produced in the powerful core-collapse supernovae that occur when a massive star dies, but they're extraordinarily hard to detect and require specialist detectors, such as the IceCube Neutrino observatory located at the South Pole. "We've only seen neutrinos from one supernova, 1987A, and that was 20 neutrinos out nos [a theorized total of] 1058," says Maguire.

Nevertheless if a supernova went off in the Milky Way and enough neutrinos could be detected from the blast, along with gravitational waves and electromagnetic radiation, it would be a pivotal observation. "The neutrinos would tell us about the explosion mechanism of the core-collapse supernova," explains Maguire. "The gravitational wave detection would be very nice for tying down the properties of the system, such as the mass. And we'd have the electromagnetic radiation as well — because it would be a supernova in our galaxy we'd be able to get very detailed observations. It would be incredibly exciting if we were able to do that."

With LIGO coming back online later this year, professional astronomers will be preparing to jump into action when another gravitational wave signal is detected. But there's another development on the horizon that should excite amateur astronomers too. In the future, the private notifications that the LIGO team send out to collaborators alerting them to a potential new gravitational wave event will be made more widely available.

"One cannot exclude the possibility that certain sources may be observable by amateur astronomers with decent telescopes," says Agathos. "For instance the host galaxy of the first neutron star binary [merger] detection was something in the region of [mag.] +12.4 and the source itself was not much dimmer. With a decent telescope, if you're lucky enough and you're in a place where the sky is dark and clear, you may actually be able to discover things before the large telescopes do."

The future of multi-messenger astronomy will certainly involve advanced, professional observatories and rapid-reaction, wide-field telescopes working alongside gravitational wave and neutrino detectors. But in among the authors of forthcoming studies they produce, we may well also see the names of dedicated amateurs working from their own back gardens.

ABOUT THE WRITER
Will Gater is an astronomy journalist, author and presenter. Follow him on Twitter at @willgater or visit willgater.com.