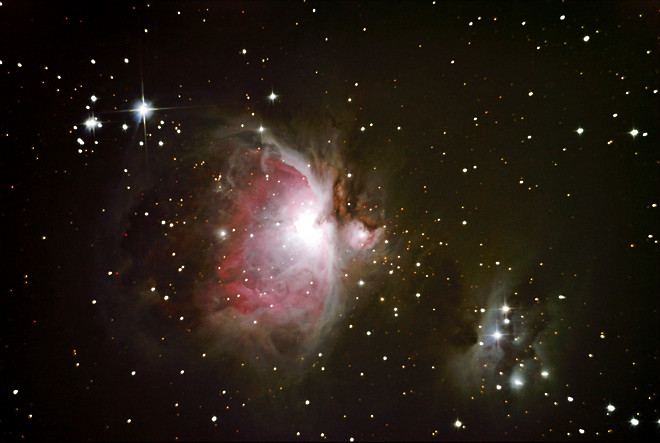 M42, the Great Orion Nebula, taken by Ron Adams from his backyard in Oakdale, Louisiana.

These concentrations of millions or billions of stars are gravitationally bound together along with gas clouds and pockets of dust. There are probably over 100 billion of them in the Universe. Some of the largest nearby galaxies appear in the night sky as faint smudges of light, but it was only in the early 20th century that astronomer Edwin Hubble proved that they actually exist well beyond our Galaxy — the Milky Way. Before then, they were thought to be spiral-shaped nebulae on its outskirts.

Hubble also established that galaxies vary in shape and size. Two-thirds have distinctive spiral patterns, while the rest range from neat ellipticals to irregular blobs. They can be dwarves containing millions of stars or giants harboring trillions.

Astronomers are still piecing together why this is the case, but collisions and mergers seem to be important in determining how a galaxy evolves. Central black holes also seem to govern how gas is consumed and when stars are formed within these cosmic conurbations.

Galaxies are much more massive than they look. Around 90 percent of their mass is not in luminous stars and gas, but in unseen 'dark matter'. It's arranged in a spherical halo, which governs the motions of the stars within. This invisible cocoon explains why the outskirts of spiral galaxies spin faster than if they were influenced by the quantity of stars and gas alone. Dark matter also governs how galaxies clump together under gravity to form filaments and clusters. Yet dark matter remains an enigma and astronomers are still trying to work out exactly what it is.

These clouds of gas and dust are scattered throughout the Milky Way, mainly in the galactic disc. Nebulae are where stars are created. One idea of how it all starts is that a shockwave from a nearby supernova explosion compresses the cloud. Once the density of the gas passes a critical point, gravity takes over.

Gravity causes clumps of the nebula to pull together. The pressure at the centers of the clumps builds and the temperature rises dramatically. If there is enough gas to fuel the process, the region can become a protostar, an early stage in the making of a star.

If the temperature in the clump reaches 10 million degrees Celsius, the nuclear furnace that powers stars ignites. Over tens of millions of years it settles into normal life and joins what's called the main sequence, like our Sun.

When you gaze up at the night sky, it looks like a lot of stars are on their own. But a solitary-looking star may be a member of a vast group that's travelling through space as a unit. If we wind the clock back millions of years, we might find these stars forming in the same vast cloud of dust and gas.

Known as open clusters, these families of anywhere from a few dozen to a few thousand stars are created in the dusty spiral arms of the Milky Way. They travel together through space, but gentle tidal forces eventually cause the stars to move apart until they begin to merge into the general starry background.

There is another variety of star cluster out there: the globular cluster. These are much bigger than the open sort, consisting of hundreds of thousands or millions of generally reddish, older stars. Whereas open clusters are found and made within the plane of the Milky Way, globular clusters form a halo around it and their creation is less well understood.