Our Sun is an oddball: most stars don't exist alone. But sociability has consequences, writes Mark A. Garlick. 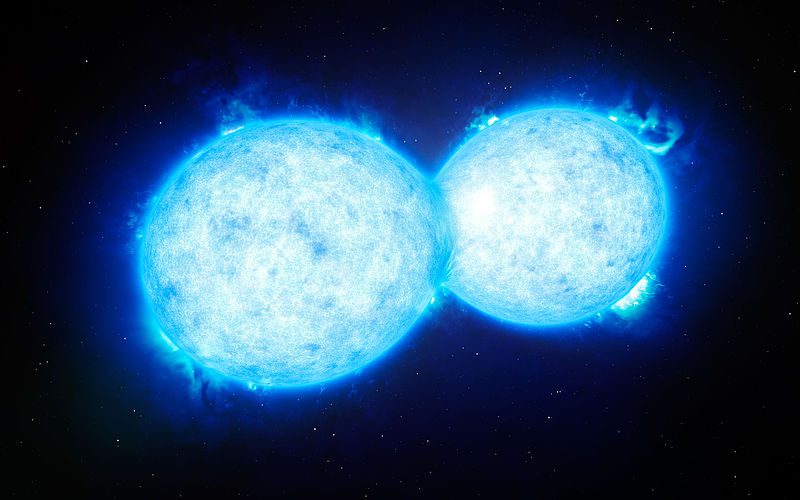 Like living organisms, stars are a social bunch. Of the 20 star systems closest to the Sun, only 12 are solitary. Stellar multiplicity is very common, and our seemingly lonesome Sun drew a short straw.

If the Sun were reduced to the size of a pea, the closest stars would still be hundreds of kilometres away. So when we consider the truly enormous scale of our Galaxy, it is obvious that stellar multiplicity cannot be the result of neighbours just passing by and becoming entangled by gravity. Though this does happen, it's phenomenally rare. The inescapable conclusion is that most stars have companions because that is how they are formed.

Stars in binaries are commonly quite far apart from each other. They might be separated by less than an astronomical unit (approximately 150 billion km, the Earth-Sun distance) or they could be hundreds of times further apart, taking centuries to complete their orbits around each other. We call this latter group detached binaries. This is where both stars occupy their own Roche lobes — the region where matter is gravitationally bound to the particular star — without spilling over and influencing its companion.

Yet often the situation is very different. If two stars are sufficiently close together when one evolves into a red giant, the atmosphere of this evolving star can stretch beyond its Roche lobe and actually reach the companion. This creates drag, which brings the stars spiralling together and makes for a much more dynamic system — what is called an interacting or semi-detached binary — with two or more stars engaged in a frenetic gravitational tug-of-war. This situation can lead to some extreme behavior.

Algol (Beta Persei) is the first example of an entire class of semi-detached star systems, hence collectively known as Algol binaries. The two stars are huddled close together, with a separation comparable to their radii and orbital periods ranging from hours to (more typically) days. This proximity means that one of the stars, usually one that has entered the late stages of its life causing it to greatly expand, is distorted by the gravity of its companion, which is usually more massive, hotter, brighter and still in the prime of life. The larger star is so expanded it is said to fill its Roche lobe. Gas from the secondary component flows towards the primary and strikes its surface on the equator. The impacting gas is then flung off, somewhat like water bouncing off a spinning ball, and spreads out around the primary to form a tenuous, messy outflow around it.

Algol binaries are variable stars, and we know of thousands of them. The variation comes from the fact they are eclipsing binaries as seen from Earth: when the secondary star passes in front of its smaller but brighter companion, the brightness dips significantly making the star flicker.

However, in cataclysmic variables we find a much more extreme semi-detached binary. Cataclysmic variables are a very broad class that includes novae and dwarf novae. The two components are almost always the same: a red dwarf and a white dwarf. These two stars are so compact that typically the entire system would fit within the bounds of our Sun. They swing around each other in a matter of hours. As in Algol binaries, one of the stars, the red dwarf, fills its Roche lobe. Gas from this star flows towards the voracious white dwarf — 10 billion tonnes of it every second — forming what is called an 'accretion disc' around it.

It is the accretion disc that gives these systems their dynamic properties and puts the cataclysm into their name. As material in the disc spirals towards the white dwarf, friction heats it to extreme temperatures, making these systems very bright in the ultraviolet and sometimes X-ray regions of the electromagnetic spectrum. Sometimes the accretion disc become unstable, suddenly dumping more gas than usual onto the white dwarf. Alternatively, there might be a momentary, rapid increase in the amount of gas being fed into the disc from the secondary. Both situations can cause a huge influx of extra material accreted by the white dwarf, which then flares up to produce a dwarf nova outburst. The amount of time between such events can vary from days to years. In even more extreme cases, the gas accumulated by the white dwarf becomes so hot and dense that the outer layers undergo thermonuclear burning, as in the centre of a star. This is a classical nova. The event is sudden and explosive, and typically destroys the accretion disc but neither star. In time, the disc will grow again and the 'cataclysm' will repeat.

Not all cataclysmic variables have accretion discs, however. Sometimes the white dwarf is highly magnetic — around 10,000 times more so than a typical bar magnet. This is strong enough to disrupt the formation of the accretion disc, resulting in a ring instead. These systems are known as 'intermediate polars'. In 'polars', where the white dwarf's magnetic field is stronger still, even a ring cannot form. In this instance, gas escaping from the secondary latches onto the white dwarf's magnetic field lines and flows towards it in great auroral arcs.

From powerful to phenomenal

X-ray binaries are more powerful still. As the name suggests, these systems are bright X-ray sources. It's a slight misnomer in that cataclysmic variables are also often X-ray powerhouses, but X-ray binaries tend to be much more luminous at these wavelengths, for reasons that will become clear.

In appearance cataclysmic variables and X-ray binaries are quite similar: a large star sometimes filling its Roche lobe, losing gas to a compact companion, often &mdsah but not always — through a disc. The distinction is that in X-ray binaries the compact primary is a neutron star or a black hole, rather than the white dwarf found in cataclysmic variables. This extra degree of compactness is what gives them their awesome power.

In cataclysmic variables, the gas in the accretion disc reaches very high temperatures as it spirals around in the disc towards the white dwarf. But neutron stars are hundreds of times smaller than white dwarfs, and black holes are tinier still. This means that the gas orbiting in X-ray binaries travels a lot closer in towards the compact star, picks up much more speed and so more kinetic energy, and experiences much greater frictional heating. The energy released when this gas accretes onto the neutron star or black hole is phenomenal. Some X-ray binaries emit as many X-rays as thousands of Sun-like stars combined.

X-ray binaries exist in two flavours. If the secondary star is lightweight, such as a red dwarf, astronomers call the system a low-mass X-ray binary. But in some cases the mass-donating star is a massive giant, in which case they are called high-mass X-ray binaries; black hole system Cygnus X-1 is an example. The class as a whole resembles cataclysmic variables in that one of the stars fills its Roche lobe. But what happens when both stars fill their respective lobes?

The two members touch at the inner Lagrangian point, causing the system to resemble a gargantuan dumbbell. Because each star is in contact with the other, astronomers refer to these as contact binaries. A famous example is W Ursae Majoris. Binary systems such as this one exchange atmospheric gases and share a sheath of gas, or envelope, and eventually they settle into a configuration where each star has the same temperature. Usually the stars are yellow to orange in color (spectral types F to K) with orbital periods ranging from five to 20 hours. Often one or both of the stars are highly magnetic, and large star spots may be present as a result. These systems are true cannibals. In time, the larger star will completely consume the envelope of its smaller, luckless cohort, laying bare its core. Eventually even this is swallowed in a final merger, until only a single star exists where previously there were two.

The delicate balance of gravity is key to understanding binary stars

The Roche lobe is the teardrop-shaped region around a star in a binary system, within which gas is gravitationally bound to the star. But at the point between the two stars where the lobes meet — the inner Lagrangian point (L1) — gravity and centrifugal forces cancel out and the gas feels no net force. That is unless one of the stars has expanded to the point that it fills its Roche lobe. This happens in cataclysmic variable and many X-ray binaries. In these cases, the atmosphere of the lobe-filling star is pushed beyond the L1 point and flows towards and around the other star. As the escaping gas stream encircles the star it eventually loops around and collides with itself. This causes it to lose energy, spread out and form an accretion disc around the companion star.

Many powerful phenomena come not from stars, but from the dusty discs around them

There are many kinds of astronomical objects that grow or evolve by gravitationally attracting and harvesting nearby material, a process termed 'accretion'. The accretion disc is simply what we call the gathered material. It is the machine that surrounds an object and allows it to grow larger and more massive. For example, stars are born at the centre of protoplanetary discs, illustrated above. As dust and gas orbit in the disc, it loses momentum and spirals into the central regions, where it accumulates.

In binary stars, accretion discs are created when a secondary star fills its Roche lobe and spills material into the lobe surrounding an adjacent primary star. The gas leaves the inner Lagrangian point and runs in a narrow stream towards and around the primary star, creating a ring-like flow. Friction in this ring causes the gas to heat up, converting potential energy into kinetic energy. The gas also loses angular momentum, so it drops down to lower orbits and spreads slowly inwards, forming a fully fledged disc. The inner regions of an accretion disc around a stellar mass black hole can have temperatures measuring millions of Kelvin — hot enough that they emit most of their energy as X-rays. Astronomers find these emissions useful because they can detect the disc easily and thus infer the presence of a black hole, even if the latter emits no radiation. Supermassive black holes also exhibit accretion discs, although they are orders of magnitude larger and cooler.

Mark A Garlick is a writer and illustrator and animator specializing in astronomy. His latest book is Cosmic Menagerie: A Visual Journey Through the Universe.