The Many Possibilities of a Total Lunar Eclipse
Print
Email Friend

During the totality phase of a total lunar eclipse, the Moon is completely immersed in Earth's shadow. If you were lucky enough to be standing on the Moon during totality, the Earth would be completely dark, with a ring of sunshine around it. "And this brilliant ring would be bright enough to dimly light up the lunar landscape," says Alan MacRobert of Sky and Telescope magazine.

But, we're not on the Moon, at least at the time of writing this. And from Earth, what we see during a total lunar eclipse is a little less predictable, which kind of makes the whole thing even more exciting, and worth staying awake for. 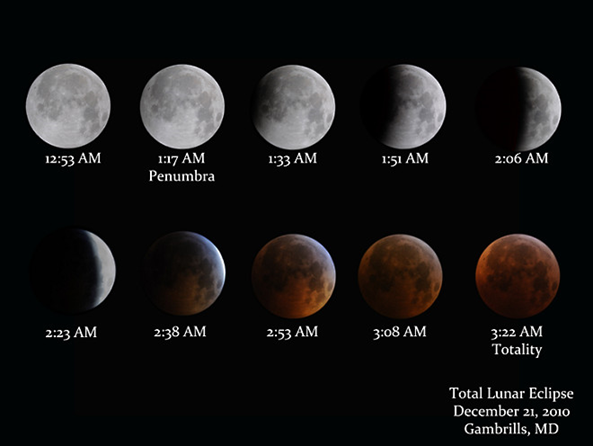 While mainstream media usually buzzes with the promise of a "Blood Moon" before a total lunar eclipse, Michael E. Bakich, of Astronomy magazine is a little more real about it: the Moon's appearance during totality can vary greatly from one eclipse to the next, he says.

So while we all hope for a bright red Moon ? the result of shorter blue rays of light being scattered from the Sun rays which bend through our atmosphere and across the Moon's shadowed surface ? it's only one of several different possible outcomes. Variables that affect the Moon's appearance include the path the Moon takes through the Earth's umbra, which is not always completely centered, and the state of the Earth's atmosphere, which contains water droplets and solid particles like dust and ash, which reduce the air's transparency, says Bakich.

"A significant volcanic eruption before a lunar eclipse can darkest the Moon's face considerably by pumping our atmosphere full of particles that halt light. Lots of clouds along the edge of our planet also can cut down the light," writes Bakich in the April 2014 issue of Astronomy. You can see an example of this by googling pictures of the total lunar eclipse of December 9, 1992, which occurred just months after Mount Pinatubo blew in the Philippines.

In the time leading up to a total lunar eclipse, all we can do really is make a few predictions, get our telescopes, binoculars, cameras, and eyeballs ready, and wait. Bring your observing notebook outside too, so you can take notes about the characteristics of this particular eclipse.

How to Estimate the Luminosity of a Total Lunar Eclipse:

In 1921, the French astronomer Andrť-Louis Danjon created a five-point scale for estimating the darkness of a total lunar eclipse. The L value stands for various luminosities, starting with the darkest. Below is a chart of Danjon's system, as explained by Bakich:

"In evaluating L, you should record both the instrument you used (if any) and the time," says Bakich. "Also document any variations in the color and brightness of different parts of the shadow, as well as the sharpness of its edge. Pay attention to the visibility of lunar features within the umbra. Notes and sketches made during the eclipse will help you recall details later."

As far as estimating the darkness and color a total lunar eclipse, Bakich recommends notes as opposed to images, since cameras typically record more than the eye can see, and often vary.

Maria Grusauskas is the Community Editor at Orion Telescopes & Binoculars, and a freelance writer in Santa Cruz, CA. A beginner in the hobby, Maria has fallen in love with stargazing and astronomy, and looks forward to imaging and sketching her observations.