Home
Articles
Astronomy
What is LCROSS?
1 of 4

What is LCROSS?
Print
Email Friend

LCROSS is NASA's Lunar CRater Observation and Sensing Satellite. Its mission is to determine whether water ice exists in the lunar soil in craters near the Moon's south pole, which it will do by crashing into the surface and producing a plume of lunar surface material. Research telescopes on Earth will be watching to analyze the content of the plume.

LCROSS was launched on July 18, 2009 along with the Lunar Reconnaissance Orbiter, a satellite that has been taking high-resolution pictures of the lunar surface.

Why is the Moon's south pole so important?

Remember that a day on the Moon?the time it takes the Moon to rotate once, or the time between two sunrises on the Moon?is as long as a month on Earth. Most parts of the Moon's surface get a couple of weeks of sunlight followed by a couple of weeks of darkness. Ice just can't form on most of the Moon's surface, because of the long, intense periods of unfiltered sunlight that would vaporize it.

Because the Moon has very little tilt with respect to the Sun, it doesn't have seasons the way the Earth does. If you could stand at one of the Moon's poles, the Sun would skim along the horizon, never rising more than a few degrees. If you were standing in a crater at one of the poles, you would never see any light at all, just like the bottom of a well only gets sunlight when the Sun is high overhead.

It's estimated that about 12,500 square kilometres (almost 5,000 square miles) of the Moon's surface is permanently shadowed like this. These are the only places on the Moon where ice could exist, so that's where LCROSS is going to look. The crater chosen as the impact site is called Cabeus. The Cabeus crater complex can be seen on the map below, marked in blue. This is what the Moon will look like on October 9. 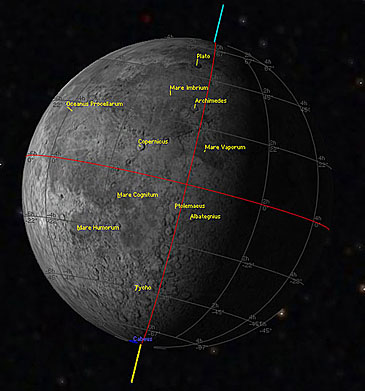 When will LCROSS impact on the Moon's surface?

The LCROSS probe will detach from the upper stage of the rocket that was used to launch it, and the rocket stage will impact on the surface first. LCROSS will observe the impact and the plume and send signals back to Earth just before it crashes into the surface itself.

Can I view LCROSS on its way to the Moon, or can I watch the impact?

Yes, you can! To observe it directly you will need at least a medium- to large-sized amateur telescope, and a CCD camera. You can use NASA's HORIZONS system to generate ephemerides (tables that tell you the celestial coordinates of an object over a period of time) of its position on its way to the Moon:

Some astronomy clubs, science centers, and planetariums near you might be having LCROSS impact parties, so check your favorite facilities for events.

Finally, if you can't get to any of these events and don't have the equipment, you can always watch coverage of the events on NASA TV. You'll see the images and hear about the results as soon as they're available. You can watch NASA TV on the internet at www.nasa.gov or check to see if your digital cable or satellite TV service carries it.