Did you ever have a guilty little pleasure? Maybe it's a weakness for peppermint patties... Or the soft spot behind a puppy's ears... Perhaps it's the smell of bacon frying. Whatever it is, that guilty little pleasure is something you know you probably should be able to resist, but can't. For me, it's the Orion Starshoot Eyepiece Camera. 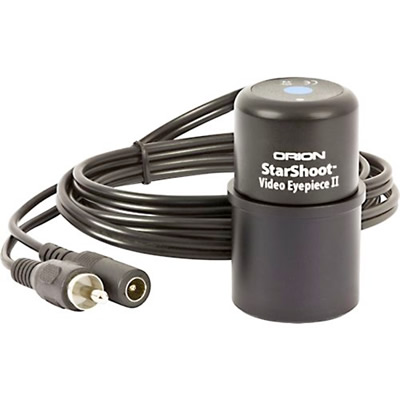 My first Starshoot was the video model. It's nothing more than a little plastic contraption about the size of a prescription bottle. Its wiring is simple. You got your cords in, you got your cords out. Turn it on, adjust the balance, focus the image while you watch the television screen and poof! You're in like Flynn.

Given my predisposition towards video equipment - especially miniaturized video equipment - I was instantly fascinated by what this camera could do. So fascinated, in fact, that I even went out and purchased a color television that had a built-in VCR. Happy were the days that I spent with that camera! I recorded sunspots, lunar craters, Venus, Jupiter, Saturn and Mars. I dragged the TV with me everywhere I went. How cool was it to be able to put the Moon in the eyepiece and be able to explain to onlookers what craters they were looking at!

My family probably tired of my "documentaries", but I was having the time of my life. I would do hours of lunar footage and sit with the remote control, rewinding and pausing. It was actually one of the greatest things I ever did for myself. Thanks to these lunar home movies, I was able to stop the action at any point and reference my Moon maps. Unlike working with a red flashlight and bungling in the dark, I was able to freeze certain areas on the film, compare it to my reference guides, and positively confirm a huge amount of challenging craters that people don't even realize they are seeing.

The same held true with observing sunspots: I kept my telescope handy - armed with an Orion glass solar filter - and each day I would record the sunspots. By having them on a video, I could review them at my leisure, watching how the spots progressed across the surface, how the umbra and penumbra changed with time and even the emergence of new spots.

The Orion Starshoot Video Camera became my teacher and I became a willing pupil. Not only did I do solar system objects, but I also graduated on to double stars. While most folks wouldn't find a couple of small dots on a black background very exciting, I did! And there's more... I also got my paws on several diffraction gratings and built my own primitive spectroscope. While I wasn't exactly breaking new scientific ground, I was doing something that no one else was... I was filming spectral lines in bright stars.

Of course, it was only natural that when I was eventually able to afford a laptop computer I "graduated" to an Orion Starshoot USB Eyepiece. While the sensitivity was no different, it did open up an easier realm of working with the footage in some respects. Before I "computerized" I used a WebTV video capture card to turn paused images into jpg files. It was very amateurish, but I was happy. Now the USB version allowed me to do so much more with the images, right down to creating short videos that I could include with my personal observing reports!

I did say it was a guilty pleasure, didn't I? Yes. Next to the big guys who are out there with the expensive CCD equipment mopping up the night, me and my little eyepiece camera look kinda' childish. But all I can say is - who cares? I have had (and still do) a grand old time with that tiny video camera and even after years of use, it still performs. Peppermint patty, anyone?