Dean Regas and the Cincinnati Observatory

Astronomer Looks to Give the Gift of Discovery 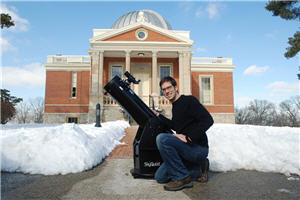 Dean Regas is a man of vision. A forward-thinking young educator, he was determined to do something significant to honor the "International Year of Astronomy" and the 400th Anniversary of Galileo's scientific use of the telescope. As Outreach Astronomer at the Cincinnati Observatory "The Birthplace of American Astronomy," he felt a special responsibility to make a mark. After all, the Cincinnati Observatory was the first public observatory in the Western hemisphere and is home to the world's oldest professional telescope in nightly use by the general public.

So last year, he conceived of and launched the "Cincinnati Observatory Center's 40 Galileos Starry Messenger Project," a program dedicated to awarding forty 8-inch Dobsonian reflector telescopes from Orion Telescopes to deserving students, teachers and community leaders across the Ohio, Kentucky and Indiana region.

Through partnerships with teachers, school administrators, and universities, Regas reasoned, the "40 Galileos" project would enhance the academic life of its participants and reach a diverse audience.

"My goal as an educator," he elucidates, "is to influence the next generation of astronomers and scientists. Essentially, my hope was to put 40 qualified experts out there bringing telescopes to the people. The program would then keep giving exponentially."

To receive a telescope, each applicant was asked to submit a viable, detailed plan of action and (as Regas says with a mischievous grin), "To swear to only use their telescopes for good, never evil."

The response far exceeded his expectations. "Going through the applications was an amazing experience," he recounts. "We received 145 unique, innovative and exciting proposals."

But the winners couldn't yet claim their prizes. Each Finalist was required to attend two training sessions with Cincinnati Observatory staff and participate in at least two star parties or sidewalk astronomy expeditions. The telescopes were then officially awarded to the participants at the Cincinnati Observatory's annual telescope fest, ScopeOut 2009 in September.

Regas' "40 Galileos" project received an added boost when it was awarded the Astronomy Magazine 2009 Out-of-this-World Award for Excellence in Astronomy Outreach.

"The initial program was a tremendous success," Regas says, "40 Galileos" delivered over 150 star gazes and reached more than 7,000 throughout the region."

But it didn't stop there. NASA was so impressed with Regas' success, that it awarded the Cincinnati Observatory a grant to continue its efforts. The updated program is called "Future Galileos Starry Messengers Project" and will award 60 more telescopes in increments of 20 each year for the next three years. Once again, they will be Orion SkyQuest XT8 Classic Dobsonian Telescopes. Why did Regas choose this particular scope?

"When planning for the International Year of Astronomy (IYA), we wanted to do something big," he explains. "One of the lofty goals of the IYA was to get everyone in the country to look through a telescope.

"I loved the idea of making telescopes accessible to more people," he continues, "And there is no better beginner scope than the Orion XT8. This is the telescope that I use at the Cincinnati Observatory and take out to star parties and public events. This is the telescope that I have trained so many people to use. It is easy-to-use, portable, inexpensive, yet large enough to discover many objects. In my opinion, the XT8 is perfect for people of all ages and skill levels who are just starting out as amateur astronomers. Students can start finding the Moon in minutes while experienced stargazers can search for deep space objects."

Regas, who is a widely-respected authority on Observational Astronomy as well as Astronomical Mythology, has been published in Sky & Telescope magazine and acts as a regular contributor to Astronomy magazine's website. In addition, he pens a regular "SkyWatch" column for the Cincinnati Enquirer and has made dozens of appearances on local television and radio programs. His informative and somewhat quirky blog, "DeanSpace" is located at: www.cincinnatiobservatory.org/deanspace.html.

On the average, the Cincinnati Observatory serves 20,000 people each year. Regas gives 100 off-site astronomy presentations by visiting schools and civic associations. Any given day may find him early in the morning sitting cross-legged on the floor teaching a group of kindergarteners at a local Montessori school; then switching gears in the afternoon, lecturing astrophysics students in a university lecture hall.

Keep an eye on Dean Regas, because he is truly a rising star on the horizon of Astronomical Education.