This Five Year Old Shoots for the Stars! 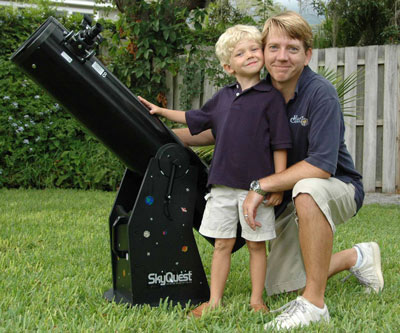 Five year old Jace has his eyes on the sky. With aspirations to become an astronaut, Jace and his father Michael have been spending some quality time with the night sky and their Orion SkyQuest XT8 Classic Dob. Michael wrote us about his first night out with Jace in the backyard with their new telescope.

I have been an astronomy fan for a long time. As a child I watched Carl Sagan's Cosmos, all the Nova and PBS shows, and would go to the Planetarium often. Later, I lived in a big city for some time and owning a telescope didn't make sense (you couldn't SEE a single star). My family and I recently moved to Florida, and my five year old son, Jace, wants to be an Astronaut and loves all things space. So, with Father's Day this weekend we decided to take the plunge.

I asked questions at the local planetarium. I needed a telescope within my budget and something that could grow with the family. We settled on an Orion XT8. 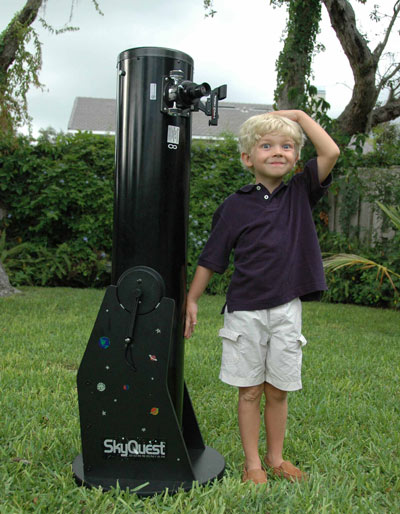 The scope arrived yesterday in the mail. My son and I put it together. He tightened down all the bolts on the base, and since the scope is as much his as mine, I let him decorate it with planet stickers. He knows his planets in order, the difference between the inner rock planets and the outer gas giants. He even told the astronomer at the planetarium that Pluto is not a planet, but a plutoid. He just eats up anything that has to do with stars and space.

With the scope decorated with the solar system, we took it out at 7:30 pm and let it acclimate, then went inside and watched the DVD that comes with the Starry Night software. We also looked through the catalog. At 9:30 pm (past his bed time) we headed out into the yard.

I said to my son "let's pick our first star to see." He can make out the Big Dipper and find Polaris on his own, and he sees Venus in the morning, but that is about it. He pointed up and said – "That's the one. That's the first one I want to see."

Since the XT8 is taller than he is, I showed him how to move the scope carefully. It was a sight to see him with both arms wrapped around the scope looking way up through the finder and with all his might and determination. He just HAD to see that star.

He climbed up the step stool and looked in, "That's no star," he shouted, "That's Saturn! It has RINGS!" I took a look, and he was right! Even at 25mm in the 8" scope you could see the rings very clearly and even one of the moons. My son's first star ended up being Saturn. I could not have been more proud, he even KNEW what it was on his own. 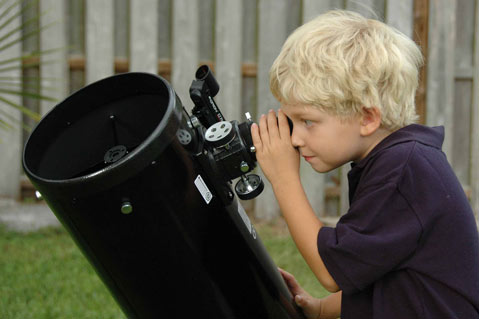 We spent the next 30 minutes looking at Saturn. He asked all kinds of questions and he learned how to slowly readjust the scope to keep the planet in view. Using a Dobsonian mount takes a little practice – because you think you should push, when you should pull. We got used to it.

It was getting late, but I wanted him to pick a second star. This time he picked one in the Big Dipper. It was the double star (Mizar and Alcor, in the middle of the handle). He said, "There are TWO stars very close." It was another exciting moment for us both. We talked about double stars and gravity.

The Orion XT8 is the best Father's Day present I could have received, a special moment shared by father and son that we will never forget. We hope to have many more great evenings under the stars. At just five years old, he already has a good grasp of how to use it. I think a job in engineering, astronomy, maybe an astronaut, or something along those lines is in his future.

Thank you Orion. You made this a very memorable Father's Day.