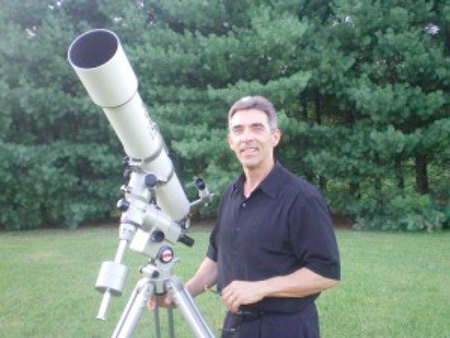 Ivester with his 4-inch Orion/Vixen refractor.

Roger Ivester has been observing the deep sky for 47 years. A visual observer in North Carolina, he has compiled over 1,000 pencil sketches and thousands of notes on the objects he has observed.

Astronomy writer Fred Rayworth says: "Roger is an extremely accomplished visual observer and astronomical artist. Not only does he eke out visual details others miss, he draws those objects as they are actually seen in the eyepiece, not some artistic rendering inspired by Hubble Images. A dedicated visual observer, he is unequaled in his dedication and accomplishments."

Ivester has been a key supporter in the current construction of the Mount Potosi Observing Complex in southern Nevada, helping to facilitate the donation of a robotic Ritchey-Chretien telescope made by Dr. James Hermann, MD, of North Carolina. When finished, the facility will not only serve the LVAS and community, but will be available to 20,000 Boy Scouts working on Astronomy Merit badges. 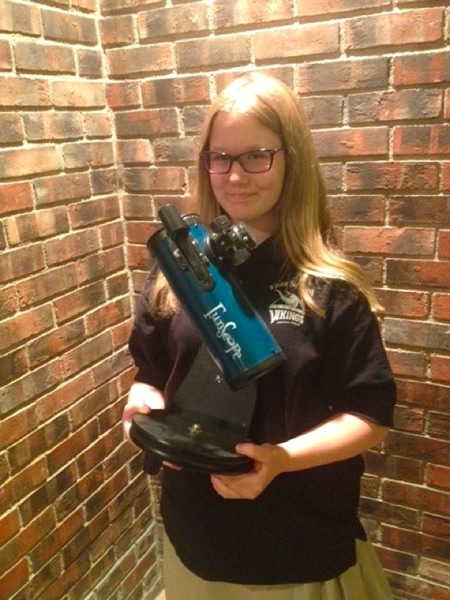 Here is Orion's Q & A with Roger Ivester:

How old were you when you first became interested in astronomy, and what drew you to explore the night sky?

I first became interested in the wonders of the night sky during the mid-60's, at about 12 or 13 years of age. My older brother had purchased a 60mm refractor and this ignited my interest. I wanted to see some of those galaxies that I had been seeing in my science books. One night I was attempting to locate the famous galaxy pair, M81 and M82. I used my hands in an attempt to block the ambient light from entering my eyepiece, and then it happened: a small, faint object entered my view, and then another. I had finally found M81 and M82. What a beautiful sight! I savored the view for the longest time. In my mind I became a real amateur astronomer that night.

When did you first begin to sketch your observations, and how has sketching enhanced your observing?

I first started sketching and taking copious notes on a regular basis in about 1990. It just seemed natural for me to document and attempt to draw what I was seeing. I found it very difficult to spend an entire night observing deep-sky objects and the next day, not having anything to show for it. I just had to have more, and I call my documentation and sketching "observing with a purpose." I now have over 1,000 pencil sketches, 2,000 notecards, and about 800 full pages of deep-sky object documentations.

What are your thoughts on the saying "imaging is technical, visual is Zen"?

Imaging is definitely more technical. As I mentioned earlier, to be able to see a distant galaxy, millions of light years away, is almost indescribable. Once you spend time with a telescope, using only an eyepiece, making very careful notes and sketching with great patience, that deep-sky object will be with you forever. Many times when someone mentions a particular deep-sky object, I can remember the object in my mind. I can close my eyes, and it's as if I am sitting beside my telescope, pencil and pad in hand, and drawing all of the faint details. It can be like reliving that night all over again. What a great feeling!

Do you think that visual observing is a lost art, or could it make a comeback in the future?

I have personally seen the demise of visual observing, especially in the past 15 years. I'm saddened to say, but it's my opinion that old fashioned visual observing will continue to decline. Digital imaging at current would seem to be the fastest growing facet of amateur astronomy. I am hopeful a movement will occur that would again spawn an interest in serious visual observing on a wide scale basis, but I can't predict this.

What does one need to get started in sketching, and can you offer any tips for drawing at the eyepiece?

Purchase a pack of 5 x 8 blank notecards, a variety of drawing pencils, a blending stump and an eraser. Draw a 3.5-inch circle toward the right side of the notecard. The left side can be used for notes. Lay your pencil on its side for an elongated object, and use your finger or a blending stump to smear the graphite until it begins to resemble the telescopic view. Now start plotting in the stars one at a time, trying your best to place in the correct location as related to the object. We can't possibly discuss in detail all the methods of sketching in a few sentences, but there are sources out there that will explain sketching in a very thorough manner. Remember one thing: You want your sketch to look similar to what you are seeing through your telescope, and not some embellished drawing that better resembles a stacked digital image. Draw the object as you see it. I also find it nearly impossible to observe an object while standing, much less attempting a detailed sketch. I've always used an adjustable astronomical observing chair when observing, and would highly recommend one. 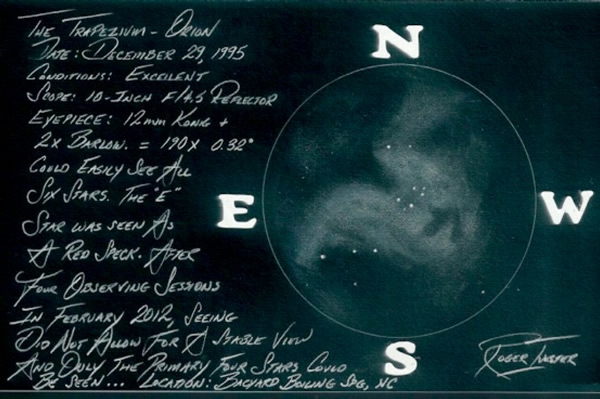 Trapezium, sketched by Ivester from his backyard in North Carolina. Colors inverted on a scanner.

Do you have any Orion-brand equipment you use regularly?

I have a 102 mm Orion/Vixen f/9.8 refractor. This telescope was purchased in 1997. This telescope has an oversized OTA, and is well-baffled, which creates an incredibly dark velvety background. Often times a good quality refractor can perform as well or better than larger telescopes of more complex design, due to the superior contrast. I use this refractor as a deep-sky scope, observing everything from close double stars to galaxies. My wife, Debbie also uses this scope, and has made numerous visual contributions to the Observers Challenge. I also have some Orion eyepieces, nebula filters, eyepiece cases, and much more. I have been well pleased with all of my Orion purchases.

On a given night, how do you decide what to observe?

It's very important to have an observing agenda before going outside. I normally start checking objects within a certain right ascension (R.A.) for the season. I then go to some of my observing reference books and read what expert observers have seen, then making notes of faint details that I too would like to see. It's very important to be prepared, before going outside.

Do you have any advice for aspiring stargazers?

Start as a visual observer, learn the night sky, make notes and try your hand at sketching. Should you decide to get into astrophotography at a later time, your visual background will serve you well. As soon as possible, attempt to observe the entire Messier catalog, and get your certificate from the Astronomical League. Establish other observing goals, and amateur astronomy will never become boring. 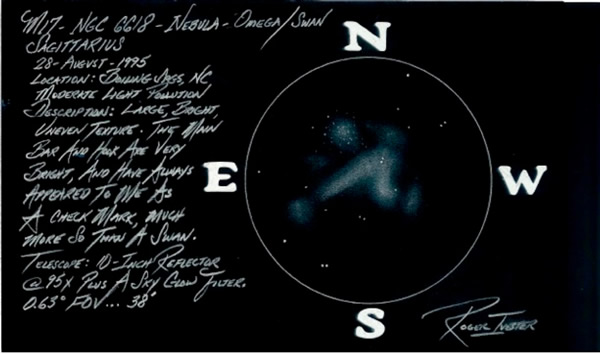 M17, The Omega Nebula, or Swan Nebula, sketched by Roger Ivester in his backyard in North Carolina. Colors inverted on a scanner.

See more of Roger Ivester's sketches and read his astronomy blog at www.rogerivester.com.