Seattle Astronomical Society Has Stars In Their Eyes 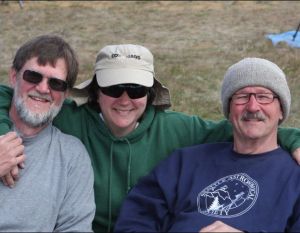 With literally hundreds of astronomy clubs across the United States alone, the fascinating hobby of stargazing continues to thrive and inspire young and old alike to explore the starry heavens. Such clubs provide an excellent resource for individuals to observe, learn about and discover astronomical wonders. Nowhere is this truth more evident than with the Seattle Astronomical Society. Recently, we caught up with longtime member Mike L., who agreed to share his insights regarding the club and astronomy in the Seattle area...

We see that you served as the VP Education Officer in years past. What was your role?
The primary role of the VP Education Officer is to coordinate, design curricula for, and carry out educational programs in astronomy specifically designed for (1) beginning members and junior members of the society, (2) elementary and secondary schools, and (3) the general public ... Most of my efforts were through participation at the Theodor Jacobsen Observatory Open House Program, science fairs at elementary schools, Cub Scout and Boy Scout groups, science fairs at the Museum of Flight and Pacific Science Center, Astronomy Day Open House at the UW, SAS new members meetings and monthly SAS public star parties. Another duty which brought me much satisfaction was being SAS Observing Club Coordinator for the Astronomy League Observing Club Certificates.

When did the Seattle Astronomical Society get started and what is its purpose?
The Seattle Astronomical Society (SAS) has been in existence for over 60 years. One member can recall attending SAS meetings at Broadway High School in 1948 ... The SAS was founded with the purpose of bringing together people who share a common interest in the observational, educational, and social aspects of amateur astronomy.

How many members does the SAS have and how does one join the club?
At last count, we had about 160 members which doesn't include family members. So the actual figure may be closer to 200 ... Our club is open to everyone and there are no requirements to join. Interested persons can join online, at a meeting (our meetings are public and membership is not required to attend), or just fill out a membership form and mail it in.

What kind of public outreach activities is the SAS involved in?
We participate in a public outreach program at the Theodor Jacobsen Observatory on the University of Washington campus twice a month. The SAS recently raised funds for the purchase of 150 telescope kits for young astronomers, and UW student volunteers are conducting telescope building sessions for the kids. It has been a very successful program with each session filled to capacity. We are also involved with schools and scouting groups, participating in science fairs and public star parties.

What are some of the preferred viewing locations for SAS members?
Green Lake and Paramount Park are locations we use for our monthly public star parties. They are in the city and suffer from the light pollution found in all cities the size of Seattle. The Tiger Mountain Star Party is located about 25 miles east of Seattle, and the skies are dark enough for the Milky Way to be seen. This is a "for members only" star party but members can bring family and guests. Another site we frequently use is Rattlesnake. It's close to Tiger Mountain but is accessible to everyone at anytime. But the Table Mountain Star Party is by far the most popular star party around. The event is held in late July or early August each year. The elevation is about 6,300 feet and far enough away from Seattle to have dark skies. Everyone I know loves it.

What challenges are associated with stargazing in the Northwest?
In a word, weather. The Pacific Northwest is beautiful but we have comparatively few clear nights. For many of us, stargazing is restricted to weekends when we can stay up all night. Any dark location is at least a one-hour drive away, so the possibilities are somewhat limited.

What are some of the favorite Orion products used by SAS members?
One very popular Orion product is your Classic XT series Dobs. Many of my friends own one of these Dobs, and I have owned an XT10 for many years. Even though I have recently purchased the XX12, I plan to keep [my XT10] forever. I have used the XT10 at more public star parties than I can count, and I will continue to use it whenever I don't have much setup time. Astro-imaging is becoming very popular these days, and Orion imaging products are showing up everywhere. Another Orion product I see a lot is your Premium ED Refractors. Orion eyepieces, laser pointers, filters and red flashlights are also popular ... The list goes on and on, and I would consider Orion products a mainstay at the star parties I attend regularly.

Any suggestions on how to get more folks interested in astronomy?
I've been somewhat successful in bringing new people into the hobby by coaxing them into attending a meeting or public star party. I realize that Orion is not in the business of organizing star parties, but I believe your idea of profiling astronomical societies is spot on. People who receive your catalogs already have an interest in astronomy and maybe additional venues would have a positive impact.

Is the SAS planning any new upcoming events?
Right now plans are being made for a SAS observing trip to the University of Washington's Manastash Ridge Observatory this summer, with the possibility of turning it into a recurring event. If this works out, a Fall event may result.