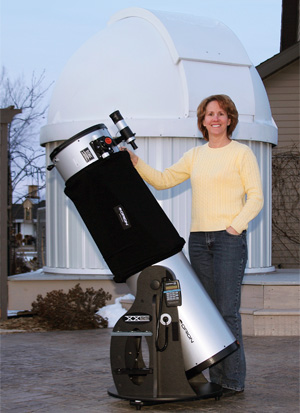 When it comes to the challenge of portability in large-aperture telescopes, Terri W. of Sherwood, Wisconsin is the perfect case in point. For this petite 5' 4" avid stargazer, weight and bulk are critical factors in deciding which telescope to use and transport on a regular basis. We were pleased to learn about Terri's excitement when she discovered our new XX12i Truss Tube Dobsonian with IntelliScope technology. Recently, we asked Terri a few questions about her passion for stargazing and the newest addition to her "light-gathering" family ...

How did you become interested in astronomy, and how long have you been actively observing?
My adventures in the night sky began over 30 years ago. At seventeen I dated an interesting fellow (who would become my husband) that had purchased a 60mm refractor. Soon we attended a Physics course in college [which] reinvigorated our interest and [we] upgraded to a 6" Newtonian f8. That scope served our interests well for several years until the photography bug set in and we invested in an 8" Schmidt Cassegrain, back when hyper-sensitized film and very long exposures were required. Although schooling and work limited my stargazing to the big celestial events for about 8 of those 32 years, we returned in earnest 12 years ago with a 10" Schmidt Cassegrain. Then in 2006, we upgraded again to the 14" Celestron which at the time we thought would be our last telescope. That was before I discovered a 10" LightBridge at the Northwoods Starfest Swap Meet. [The] truss-tube construction would enable me to set up the gear myself due to its light weight [and] portability, while my husband set up his [telescope] for astrophotography. [Now] we share in observing with the SkyQuest XX12, while images [are] being taken in the other scope.

What is your favorite type of celestial object to view?
Comets are my favorite object, when they're close enough to sport a tail. Since comets are a relative rarity, I lean towards Mars because of its changing conditions. Some nights you can watch a huge dust storm sweep across the planet and other really stable nights, see some dark structure to [the] mountain ranges. I can hardly wait for its return late this year.

Share one of your most interesting viewing experiences.
If I had to choose just one memorable stargazing night it would have to be watching the fragments from Comet Levy-Schumacher collide with Jupiter. The dynamic nature of that event has eclipsed the best static object night of observing. But only if I had to choose one moment. To suggest that the "Perfect 10" viewing night when we tent camped in central Wisconsin in mid-October, as temperatures dropped to 18° Fahrenheit, was less stellar than other favorite nights, would be unfair. That night, galaxy M51 showed structural details I hadn't seen before (in the 10" Schmidt Cassegrain). The night in the Northwoods on a frozen lake in December while taking images, when a fireball meteor streaked the entire breadth of the night sky so brightly it appeared to cast a shadow, was also magnificent.

On a given night, how do you decide what to observe? Do you normally plan ahead or just view whatever you can find?
I like to plan ahead. Planning a list of objects adds to the excitement for me. I'll use a Planisphere to check the constellations rising and setting at the time I'll start viewing. Starting with the setting constellations, I'll then refer to detailed star charts for the specific objects in those constellations. I'll pick an assortment of globular clusters, nebulae and galaxies along with the major viewing planets, if available. Since getting the Orion SkyQuest XX12, I need only the Night Sky Tour software that was included. It is a great, intuitive tool.

Where do you do most of your observing? Have you transported the XX12 to any remote observing sites?
Most of my observing is from my backyard in Sherwood, Wisconsin. There are also good remote sites within one hour of home. The Wisconsin Observers' Weekend and Northwoods Starfest are favorite annual group events, though we often conduct impromptu star parties for the public or special occasions such as the 'Becoming an Outdoors Woman' winter and fall events. The XX12 transports easily in the backseat of my car.

What compelled you to purchase the XX12?
What's more compelling than the portability of truss-tube construction, merged with the 'push-to' alt-azimuth directions offered by the IntelliScope technology? I couldn't have been more excited when I became aware that these two features were brought together by Orion. Although I believe 10" [of] light-gathering [ability] is fine for most anything I like to observe, a solid tube is just not practical for me to haul around. I chose to go the extra two inches to the 12" for the truss-tube benefits since the base, the heaviest section, is still [less than] 40 pounds. Weight and bulk is a critical decision factor for me. A petite 5'4" and lacking my earlier youthful strength, the XX12 allows me to set-up the equipment and observe whenever the mood strikes me.

What benefits have you identified as a result of owning a large aperture instrument?
Tiny, dim smudges become nearly dim shapes. But if you're yearning to see the spiral arms of M33, the streaming matter in M51 or the dark nebula regions in the Trifid, good light-gathering [ability] and great resolution make the difference.

Besides the XX12, are there any Orion-brand accessories or equipment you use regularly?
The travel cases and shroud. The cases are well-made and make transporting and storing the scope a cinch. I love how the main mirror housing case has the carry straps off-center so that the unit balances nicely when you're carrying it. Being in Wisconsin, I enjoy the more stable (though frigid) night air. That often means transporting the gear several yards over snow-crusted terrain. Having the cases relieves some of the anxiety that traversing uneven ground creates.

What advice would you give to aspiring stargazers?
Go to public stargazer events through the local astronomy club. These events often have many telescopes of varying construction that you may have an opportunity to compare. Ask questions so you can determine what is best for your interests. Join [a forum] where a huge [number] of kindred spirits willingly offer [their] opinions. Then buy the 8" or 10" SkyQuest IntelliScope. If you have the extra in your budget, go for the XX12. You'll never need another observing scope and you'll save yourself 30 years of upgrades, 2 inches at a time. Portability, at 12" of light-gathering greatness, that breaks down into three convenient-sized sections, is worth every penny.

Is there anything else you would like to say about the XX12 or your experience with Orion?
Excellent quality, excellent value, excellent service. When my unit arrived, the items were well-padded with form-fitting foam inserts and sturdy carton construction. Even so, one package took an apparent blow from a forklift, which punched a hole in one of the really nice, hard OTA caps. A single call to Orion, no questions asked, and two days later I had a replacement sitting at the door. The tube paint is perfect, the eyepiece holder nicely machined.