Friday, June 7 - With no Moon to contend with tonight, let's start by locating 5th magnitude star, 6 Comae Berenices about three finger widths east of Beta Leonis. Remember this star! We are going on a galaxy hop to a Mechain discovery that is less than a degree west, and its designation is M98 (Right Ascension: 12:13.8 - Declination: +14:54). 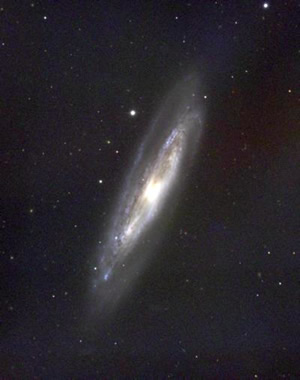 At magnitude 10, this beautiful galaxy is a telescope-only challenge, and a bit on the difficult side for small aperture instruments. Long considered to be part of the Virgo Cluster, M98 is approaching us at a different rate than other cluster members, giving rise to speculation that it may simply be in the line of sight. Quite simply put, it has a blue shift instead of red. But considering that all these galaxies (and far fainter ones than we can see), are in close proximity leads some researchers to believe it is a true member by virtue of the extreme tidal forces which must exist in the area,pushing it towards us at this point in time, rather than away.

In a small telescope, M98 will appear like a slim line with a slightly brighter nucleus, a characteristic of an edge-on galaxy. To large aperture, its galactic disk is hazy and contains patchiness in structure. These are regions of newly forming stars and vast regions of dust - yet the nucleus remains a prominent feature. It's a very large galaxy, so be sure to use a minimum of magnification and plenty of aversion to make out small details in this fine Messier object!

Saturday, June 8 - Tonight is New Moon! Are you ready for another galactic challenge? Tonight we'll return once again to 6 Coma Berenices and head no more than a half degree southwest for another awesome galaxy: M99 (Right Ascension: 12:18.8 - Declination: +14:25). 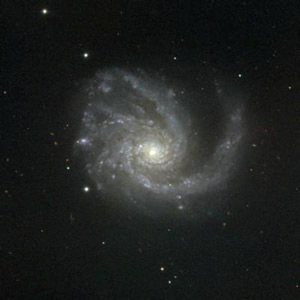 Discovered by Pierre Mechain on the same night as he found M98, this is one of the largest and brightest of the spiral galaxies in the Virgo Cluster. Recognized second after M51 for its structure, Lord Rosse proclaimed it to be "a bright spiral with a star above." It is an Sc class, and unlike its similarly-structured neighbors, it rotates clockwise. Receding from us at 2,324 kilometers per second, its speedy retreat through the galaxy fields and close pass to approaching M98 may be the reason that it is asymmetrical?with a wide arm extending to the southwest. Three documented supernovae have been recorded in M99, in 1967, 1972 and 1986.

Possible to view in large binoculars with excellent conditions, this roughly 9th magnitude object has low surface brightness and requires clean skies to see details. For a small telescope, you will see this one as fairly large, round, wispy, and with a bright nucleus. But, unleash aperture if you have it! For large scopes, the spiral pattern is very prominent and the western arm shows well. Areas within the structure are patchworked with bright knots of stars and thin dustlanes which surround the concentrated core region. During steady seeing, a bright, pinpoint stellar nucleus will come out of hiding. A worthy study!

Sunday, June 9 - Before the Moon returns to early evening skies, let's take this opportunity to return again to 6 Comae. Our hunt will be for the last of the three galaxies discovered by Mechain on that same wonderful night in 1781. You'll find it just a finger width northeast of 6. Its name is M100 (Right Ascension: 12:22.9 - Declination: +15:49). 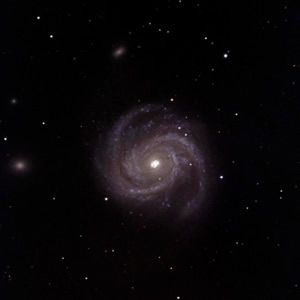 M100 is one of the brightest member galaxies of the Virgo Cluster of galaxies, and its design is much like our own galaxy. From our point of view, we see M100 "face on," and even Lord Rosse in 1850 was able to detect a spiral form from a mere 60,000 light years away. Thanks to its proximity to other galactic members, it has two grand arms in which recently-formed, young, hot, massive stars reside. Regardless of what seems to be perfect form, the nucleus shows that younger stars have developed more to the south side than the north. Perhaps it's an interaction with its dwarf neighbors?

Achievable in binoculars as a soft round glow, and about the same in a small telescope, extensive photography has shown M100 to be far larger than previously believed, with a substantial portion of its mass contained in faint outer regions. The Hubble Telescope discovered over 20 Cepheid variables and one nova contained inside our spiral friend, and accurately determined its distance at 6 million light-years. In addition, NASA's Ultraviolet Imaging Telescope has shown starburst and formation activity at the edges of M100's inner spiral arms.

Larger telescopes will see this galaxy's intense core region as slightly elliptical and sometimes reveal patchiness in the structure. With good sky conditions, even smaller scopes can reveal a spiral pattern, and this improves significantly with aperture. Be sure to look carefully because five supernovae events have been observed in this hot galaxy, one as recently as February 2006!

Until next week, Dreams really do come true when you keep on reaching for the stars!

Have you spotted any of these galaxies? Tell us about it in the comments!