Friday, May 17 - Tonight no two features in the northern lunar hemisphere will be more prominent than craters Aristoteles and Eudoxus. Why not take some time to study them? They are easily spotted in a telescope and even viewable in small binoculars. Let's start our observing night by taking a closer look at larger Aristoteles- the northernmost of the pair.

As a Class 1 crater, this ancient old beauty has some of the most massive walls of all lunar features. Named for the great philosopher, it stretches across 87 kilometers of lunar landscape and drops below the average surface to a depth of 366 meters-a height which is similar to one of Earth's tallest waterfalls, the Silver Cord Cascade of Wyoming. While it has a few scattered interior peaks, the crater floor remains almost unscarred. As a telescopic lunar club challenge, be sure to look for a much older crater that sits on Aristoteles eastern edge. Tiny Mitchell is extremely shallow by comparison and only spans 30 kilometers. Look carefully at the formation, for although Aristoteles overlaps Mitchell, the smaller crater is actually part of the vast system of ridges which supports the larger.

When you're done, let's have a look at a binary star system in the constellation Virgo-the Gamma Virginis!

Better known as Porrima, this is one cool binary with almost equal spectral types and brightness. Discovered by Bradley and Pound in 1718, John Herschel was the first to predict this pair's orbit in 1833 and state that one day they would become indecipherable to all but the very largest of telescopes-and he was right. In 1920 the A and B stars had reached their maximum separation, and during 2007 they were as close together as they would ever be. Observed as a single star in 1836 by William Herschel, its 171 year periastron will put Porrima in nearly the same position as it was when Sir William first saw it!

Saturday, May 18 - Our first observing challenge for the evening will be a telescopic one on the lunar surface known as the Hadley Rille. Begin by identifying Mare Serenitatis and look for the break along its western shoreline that divides the Caucasus and Apennine mountain ranges. Just south of this break is the bright peak of Mons Hadley. You'll find this area of highest interest for several reasons, so power up as much as possible! 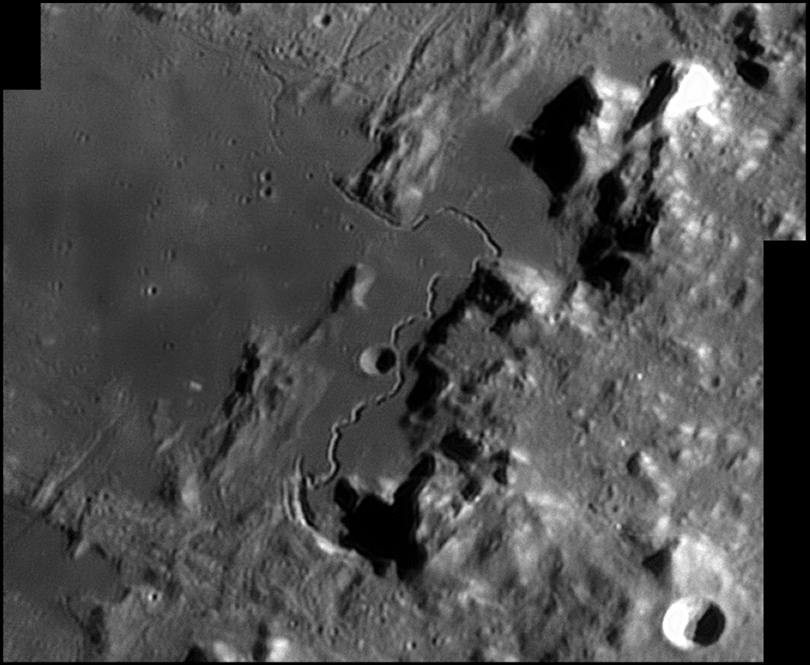 Impressive Mons Hadley measures about 24 by 48 kilometers at its base and reaches up an incredible 4,572 meters. If this mountain was indeed caused by volcanic activity on the lunar surface, this would make it comparable to some of the very highest volcanically caused peaks on Earth, such as Mount Shasta or Mount Rainer. To its south is the secondary peak Mons Hadley Delta-the home of the Apollo 15 landing site, just a breath north of where it extends into the cove created by the dark sands of Palus Putredinus.

Along this ridgeline and smooth floor, look for a major fault line known as the Hadley Rille. You'll find it winding its way across 120 kilometers of lunar surface. In places, the rille spans 1500 meters in width and drops to a depth of 300 meters below the surface. Believed to have been formed by volcanic activity some 3.3 billion years ago, we can see the impact that lower gravity has had on this type of formation, since earthly lava channels are less than 10 kilometers long and only around 100 meters wide. 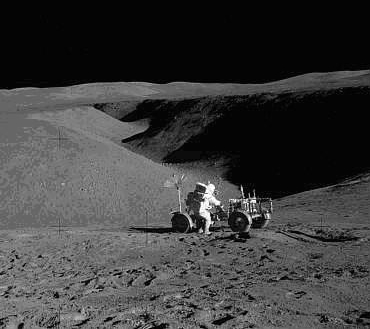 During the Apollo 15 mission, Hadley Rille was visited at a point where it was only 1.6 kilometers wide-still a considerable distance as seen in respect to astronaut James Irwin and the lunar rover. Over a period of time, its lava may have continued to flow through this area, yet it remains forever buried beneath years of regolith.

Now, let's head about four finger widths northwest of Beta Virginis for another unusual star-Omega. Classed as an M-type red giant, this 480 light-year distant beauty is also an irregular variable which fluxes by about half a magnitude. Although you won't notice much change in this 5th magnitude star, it has a very pretty red coloration and is worth the time to view.

Sunday, May 19 - Are you ready to go observing? Then let's dance! Tonight on the Moon, we'll be looking for another challenging feature and a crater which conjoins it-Stofler and Faraday. 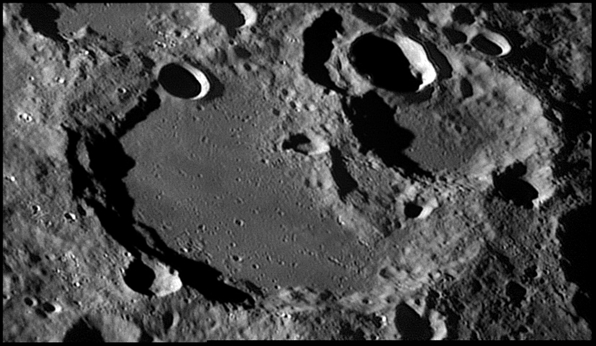 Located along the terminator to the lunar south, crater Stofler was named for Dutch mathematician and astronomer Johan Stofler. Consuming lunar landscape with an immense diameter of 126 kilometers and dropping 2760 meters below the surface, Stofler is a wonderland of small details in an eroded surrounding. Breaking its wall on the north is Fernelius, but sharing the southeast boundary is Faraday. Named for English physicist and chemist Michael Faraday, it is more complex and deeper at 4,090 meters, but far smaller at 70 kilometers in diameter. Look for myriad smaller strikes which bind the two together!

If you're up for a bit more of a challenge, then let's head about 59 light-years away in Virgo for star 70. You'll find it located about 6 degrees northeast of Eta and right in the corner of the Coma, Bootes, and Virgo border. So what's so special about this G-type, very normal-looking 5th magnitude star?

It's a star that has a planet.

Long believed to be a spectroscopic binary because of its 117 day shifts in color, closer inspection has revealed that 70 Virginis actually has a companion planet. Roughly 7 times larger than Jupiter and orbiting no further away than Mercury from its cooler-than-Sol parent star, 70 Virginis B just might well be a planet cool enough to support water in its liquid form. How "cool" is that? Try about 85 degrees Celsius...

Until next week? Ask for the Moon, but keep on reaching for the stars!