Do you enjoy sky-watching? During the month of May, there is an exciting event which doesn't require the use of a telescope or binoculars. All you will need is your eyes, an unobstructed western horizon and clear skies 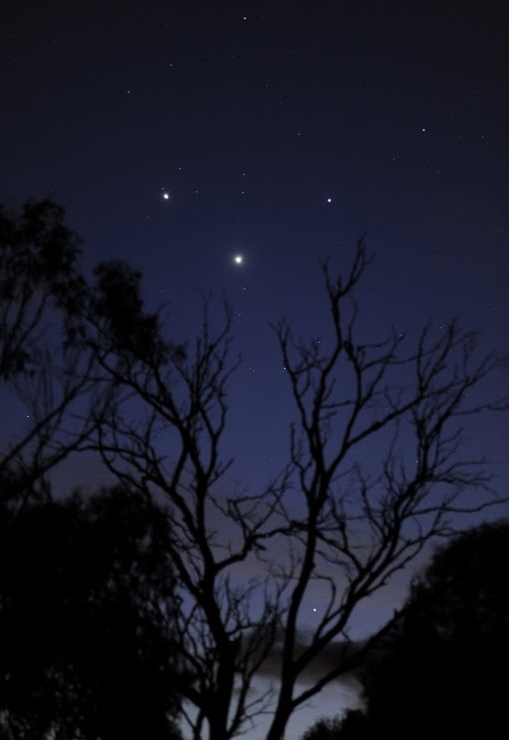 Beginning on May 10, there's a "line up" happening on the western horizon. If sky conditions permit, you will see a very faint, very slender crescent Moon, only hours old. It will be accompanied by bright Venus to the north and Jupiter high above them to the east-southeast. On May 11 the Moon moves its position and will be located directly between Venus and Jupiter. By May 12, the Moon has climbed even higher - taking station above Jupiter. By the evening of May 21 and May 22, the Moon will accompany Saturn and the bright star, Spica, in the constellation of Virgo. While the Moon will climb higher as it heads east each night, keep your eyes on the two western planets... they are about to dance.

Let's learn about what we'll see!

We watch it occur in the sky. We accept that it's natural. We even know this gathering of planets is called celestial mechanics. But exactly what laws govern these movements and how do we understand them? Let's take a look...

Once upon a time, just two days after Christmas in 1571, a very cool dude named Johannes Kepler was born. Like some of us, he had a pretty rough life. His dad died when he was 5, but he had a great mom. She was not only a waitress, but a herbalist as well. One of the best things she ever did for her son was to take him out to watch the Great Comet of 1577 and a lunar eclipse in 1580. Even though she ended up being later tried for witchcraft, the love of astronomy that she inspired in her son would shape the way we now understand planetary motion.

Kepler wasn't always lucky. Smallpox crippled his vision and hands, but that didn't stop him. He excelled at studying planetary motion in the astrological sense and kept busy as a math teacher. Not only did he like numbers, but he also liked to play around with lenses, too? and write letters to his friend Galileo Galilei. Even though he ran the risk of losing his job and getting in trouble with the church, Kepler defended Copernican theory of a Sun-centered system and went on to devise some formulae of his own. At age 24, he was teaching a class about the conjunction of Saturn and Jupiter when he realized that regular polygons bound one inscribed and one circumscribed circle at definite ratios, which, he reasoned, might be the geometrical basis of the Universe. Thankfully, his school supported him and published his work as the Mysterium Cosmographicum, or Cosmographic Mystery.

Fortunately, that was a good move and it landed Kepler a part time job helping out an astronomer named Tycho Brahe. To make a long story short, that was his introduction into the real world of astronomy and many long years and bad political times kept things from progressing. However, the astronomers of the time respected his work in their own ways and continued to test out Kepler's theories - right down to his predictions when Venus and Mercury would transit the Sun. Yep. It would be long after Kepler died before his ideas were finally recognized, but these three principles withstood the test of time:

1. The orbit of every planet is an ellipse with the Sun at one of the foci.

2. A line joining a planet and the Sun sweeps out equal areas during equal intervals of time. (Suppose a planet takes one day to travel from point A to B. The lines from the Sun to A and B, together with the planet orbit, will define a (roughly triangular) area. This same amount of area will be formed every day regardless of where in its orbit the planet is. This means that the planet moves faster when it is closer to the Sun.) This is because the Sun's gravity accelerates the planet as it falls toward the Sun, and decelerates it on the way back out, but Kepler did not know that reason.

Now that we understand the law, let's go out and observe! 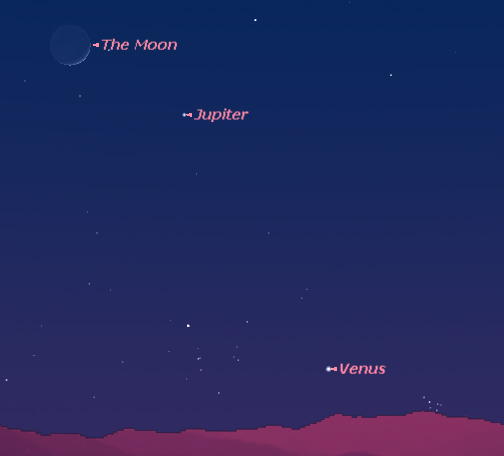 If you paid attention to Kepler's laws, you'll notice that Venus climbs just a bit higher each night, while Jupiter lowers to the west. Around May 20, another player will enter as tiny, dim Mercury emerges from the Sun's glare and joins the show. On May 27, the trio will make a spectacular appearance as they triangulate low on the western horizon. This event is called a conjunction. Even though Momma said it ain't polite to stare, there's a very good reason we humans can't take our eyes off this celestial phenomenon!

"Your eye is like a digital camera, " explains Dr. Stuart Hiroyasu, O.D., of Bishop, California. "There's a lens in front to focus the light, and a photo-array behind the lens to capture the image. The photo-array in your eye is called the retina. It's made of rods and cones, the fleshy organic equivalent of electronic pixels."

Near the center of the retina lies the fovea, a patch of tissue 1.5 millimeters wide where cones are extra-densely packed. "Whatever you see with the fovea, you see in high-definition," he says. The fovea is critical to reading, driving, watching television. The fovea has the brain's attention. The field of view of the fovea is only about five degrees wide. "Tonight, Venus, Jupiter and Mercury will all fit together inside that narrow angle, signaling to the brain, "This is worth watching!"

When it comes to our eyes, almost every photoreceptor has one ganglion cell receiving data in the fovea. That means there's almost no data loss and the absence of blood vessels in the area means almost no loss of light either. There is direct passage to our receptors - an amazing 50% of the visual cortex in the brain! Since the fovea doesn't have rods, it isn't sensitive to dim lights. That's another reason why the conjunctions are more attractive than the surrounding star fields. Astronomers know a lot about the fovea for a good reason: it's is why we learn to use averted vision. We avoid the fovea when observing very dim objects in the eyepiece.

Let's pretend we're a photoreceptor. If a light were to strike us, we'd be "on" - recording away. If we were a ganglion cell, the light really wouldn't do much of anything. However, the biological recorder would have responded to a pinpoint of light, a ring of light, or a light with a dark edge to it. Why? Light in general just simply doesn't excite the ganglion, but it does wake up the neighbor cells. A small spot of light makes the ganglion go crazy, but the neighbors don't pay much attention. However, a ring of light makes the neighbors go nuts and the ganglion turns off. It's all a very complicated response to a simple scene, but still fun to understand why we are compelled to look!

Many of us have been watching the spectacle of the planets as they draw closer over the last several days. How many of you have seen the Venus and Jupiter pair appear one over the top of each other - looking almost like a distant tower with bright lights? Once again, we've been observing Kepler's Laws of Planetary Motion in action - and it's a great way to familiarize your self with celestial mechanics. What's happening is called a conjunction. This is a term used in positional astronomy which means two (or more) celestial bodies appear near one another in the sky. Sometimes this is also called an appulse. No matter what you call it, it's an event worth watching!